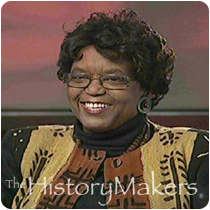 See how Niara Sudarkasa is related to other HistoryMakers

Accomplished scholar, educator, Africanist, and anthropologist, Niara Sudarkasa, was born Gloria Albertha Marshall on August 14, 1938, in Fort Lauderdale, Florida. Sudarkasa was a gifted student who excelled at Dillard Elementary and Dillard High School; skipping several grades, she was a junior at the age of fourteen, and accepted early admission to Fisk University on a Ford Foundation Scholarship when she was just fifteen years old. In 1955, Sudarkasa transferred to Oberlin to complete her studies. Sudarkasa earned her A.B. degree in anthropology and English from Oberlin in 1957. In 1959, Sudarkasa received her M.A. degree in anthropology from Columbia University. In 1961, Sudarkasa traveled to London and Nigeria to complete doctoral research on Yoruba language and culture. While completing her PhD, Sudarkasa taught at Columbia, becoming the first African America woman to teach at the university; she earned her PhD from Columbia in 1964.

Sudarkasa achieved another first when she became the first African American woman to be appointed assistant professor of anthropology at New York University in 1964. Sudarkasa was also the first African American to be appointed to the Department of Anthropology at the University of Michigan in 1969. While at Michigan, Sudarkasa became involved in civil rights and student issues; she quickly climbed the academic ladder at Michigan, ending her seventeen year tenure as associate vice president for academic affairs. Sudarkasa left Michigan in 1986 when she became the first female to serve as president of Lincoln University in Pennsylvania.

Sudarkasa’s accomplishments at Lincoln are highlighted in the report, Lincoln University – The Drive Toward Distinction. Under Sudarkasa's presidency the university increased enrollment, strengthened its undergraduate and international programs, and put into place an ambitious minority recruitment effort; she left her post at Lincoln in 1998.

Sudarkasa serves as Distinguished Scholar in Residence at the African American Research Library and Cultural Center in Fort Lauderdale. Sudarkasa has authored numerous publications, including The Strength of Our Mothers: African And African American Women in Families; Where Women Work: Yoruba Traders in the Marketplace and in the Home; and Exploring the African American Experience. Sudarkasa has been awarded thirteen honorary degrees over the course of her career, including one from Ft. Hare in South Africa, and is the recipient of nearly 100 civic and professional awards. In 2001 Sudarkasa became the first African American to be installed as a chief in the historic Ife Kingdom of the Yoruba of Nigeria.

See how Niara Sudarkasa is related to other HistoryMakers
Click Here To Explore The Archive Today!