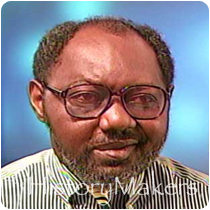 See how Newton Collier is related to other HistoryMakers

Newton Collier was born on July 23, 1945 in Macon, Georgia. His parents, Lucile Birdsong and Newton Collier, led a group called the Sweethearts of Rhythm. With his parents' example to guide him, Collier began playing piano at age six and the trumpet at ten. He started playing professionally with the Pinetoppers, the original band backing Otis Redding. Soon after graduating from Ballard Hudson High School in 1963, he joined Sam and Dave, who are best known for their 1967 Grammy award-winning song "Soul Man."

Sam and Dave's band broke up in 1970 after an international tour. The horn section formed a new band called LTD and moved to Boston. Collier worked on a freelance basis and married his sweetheart, Beverly Nelson. Their daughter, Charity, was born in 1973. Then, one night in 1976, tragedy struck. Collier was going home from an engagement when an unknown assailant shot him in the face. After three years of reconstructive surgery and recovery, Collier could speak well enough to be understood-but he could not withstand the pressure required to play the trumpet or trombone.

After the accident, Collier helped publish Progressive Platter Music Review. Having studied electronics at Boston's Wentworth Institute, he found work as an electronic technician-first at the Massachusetts Institute of Technology from 1970 to 1976, then at Wells Fargo from 1976 to 1982. From 1979 to 1988, he worked in the fledgling computer industry at Honeywell Computers. In 1984, Collier learned of an instrument designed by John Steiner at M.I.T. called the E.V.I., Electronic Valve Instrument. This windblown synthesizer, sounding like a trumpet but requiring far less air, enabled Collier to play in Boston-area cafes and small clubs.

In 1988, Collier moved back to Macon and opened Collier's Records and Tapes, specializing in rare and collectible albums. Unfortunately, despite the store's magnificent collection, it did not turn a profit and closed in 1997. Collier now makes a living as a taxicab driver.

See how Newton Collier is related to other HistoryMakers
Click Here To Explore The Archive Today!