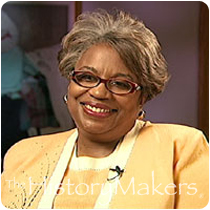 Born in Fairfield, Alabama, on February 11, 1948, Nelvia Brady spent most of her life in Chicago, Illinois. Upon graduating from high school in Chicago, Brady went to the University of Illinois at Urbana-Champaign, where she earned her B.A. degree in sociology in 1970. In 1973, Brady graduated from the University of Wisconsin with her M.S. degree in guidance and counseling, and in 1980 she earned her Ph.D. degree from Michigan State University.

After earning her master's degree, Brady went to Minneapolis, Minnesota, where she spent the next five years working as the lead counselor for two local high schools and an elementary school. While working on her Ph.D. degree, Brady also worked as a research associate at Michigan State. After completing her doctorate, Brady took a job with the Educational Testing Service, working on the Chicago Public Schools for Student Desegregation Project. In 1981, Brady went to work directly for the Chicago Public Schools, first as an assistant to the associate superintendent, eventually rising to hold that position herself. In 1985, Brady went to work at the Chicago Community Trust, where she launched a $5 million education initiative, and served as the executive director of the Coleman Fund for Children and Youth. In 1988, Brady became chancellor of the City Colleges of Chicago, where she was the first African American and only female to have held the post at the time.

Brady became involved in consulting in 1992, while maintaining visiting professorships at Chicago State and the Art Institute of Chicago. In 1994, Brady became senior vice president of Carrington & Carrington, an executive recruiting firm that specialized in helping Fortune 500 companies in the recruitment and placement of African Americans, Hispanics, women, and other diverse individuals, in executive positions. In 2002, Brady returned to academia part time, and left consulting behind completely in 2003, taking a post at Trinity Christian College as a professor in the business department and as director of ethnic diversity.

Brady was named by Executive Educator as one of the Top 100 School Managers in North America; she received the Alumni Achievement Award from the University of Wisconsin's School of Education, and was named by Today's Chicago Woman as one of 100 Women Making a Difference. Brady also authored two books, This Mother's Daughter and 300 Pearls of Wisdom. Brady served on a number of boards of directors, including the Chicago State University Foundation and the Pullman Educational Foundation.