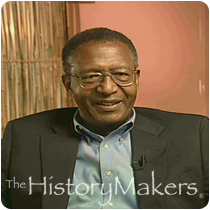 "Enough Talking. Let's Get It Done."

Production executive Nelson Davis was born Nelson Lee-Earnest Davis, Jr. on October 6, 1942, in Andalusia, Alabama, and grew up in Niagara Falls, New York. At the age of fourteen, Davis knew he wanted to pursue a career in radio broadcasting. His career began with a high school internship program and part-time announcing job at a local radio station. From Niagara Falls, he moved to a larger station in Ottawa, Ontario, where he took courses in business, worked as a program director and hosted various television shows.

After becoming a freelance host and producer, Davis worked on a series for PBS, commercials for presidential candidate Ronald Reagan, and a film in Africa. In 1980, Davis joined the NBC-TV network as manager of mini-series, eventually becoming director of daytime programming. His first weekly series was MAKING IT! Minority Success Stories, a show that was on the air from March of 1989 and received over twenty-five awards and citations, including two local Emmy Awards as Best Public Affairs series. In 1984, Davis was named the executive producer of Name That Tune for the show’s rebirth. He was hired by Merv Griffin to produce the pilot episode of Jeopardy!, and he helped launch the Fashion Channel. He started his own production company in 1988, Nelson Davis Television Productions. The following year, his production company created and co-produced Campus All-Star Challenge, a quiz series for historically black colleges. Nelson Davis Television Productions also produced children's specials built around oral storytelling, and Black History Notes.

Davis serves as the Los Angeles Area Vice President of the Academy of Television Arts & Sciences. He is a member of the Board of Advisors for the National Association of Women Business Owners and is on the Board of Directors of the Pacific Coast Regional Small Business Development Corporation. Davis is a member of the Santa Monica College Associates and has also been active with Big Brothers. He is the recipient of numerous awards, including the Media Advocate of the Year Award and the Minority Advocate of the Year Award from the U.S. Small Business Administration, the Supplier of the Year Award from the Southern California Regional Purchasing Council, and the Entrepreneurial Dream Maker Award from the Women's Enterprise Development Corporation. Davis also received the Entertainment Award from the Los Angeles Mayor's Minority Business Committee.