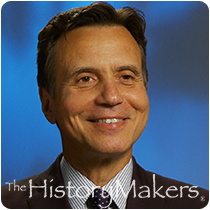 Businessman and lawyer Clarence O’Neill “Neil” Brown III was born on November 1, 1952 in Jersey City, New Jersey to Clarence Brown and Betty Bascome. After Brown’s father died when he was three, his mother worked as a secretary and then became a loan officer at a bank. He attended Nishuane Elementary school, a public school in Montclair, New Jersey, and then Newark Academy, a private high school in Livingston, New Jersey. In 1974, Brown graduated from Harvard University with his A.B. degree in government. He went on to receive his M.B.A. degree from the Harvard Graduate School of Business Administration and his J.D. degree from Harvard Law School in 1979.

Brown moved to New York City in 1980 and worked as an attorney with the law firm of Sherman & Sterling. In 1981, he was hired at Home Box Office (HBO), where he went on to serve as vice president of programming. In 1986, Brown and his wife, Amsale Aberra, launched Amsale Aberra, Inc., a bridal gown company generally known as Amsale, out of their New York City apartment. In 1998, he founded Anavista Entertainment, L.L.C., a music, film and television production, distribution and consulting company. Brown then became chief executive officer of Amsale in 2001, now known as The Amsale Group, and includes the three luxury bridal collections of Amsale, Christos and Kenneth Pool.

He is a member of the Sigma Pi Phi fraternity, and served as Sire Archon of Beta Zeta Boule from 2005 to 2007. Brown and his wife live in Manhattan, New York City. They have one daughter, singer-songwriter Rachel Brown.

Neil Brown was interviewed by The HistoryMakers on June 17, 2014.