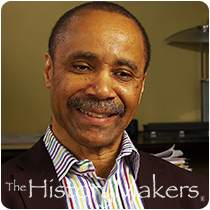 See how Nathan McCall is related to other HistoryMakers
Donate Now

Journalist and author Nathan McCall was born on November 25, 1954 in Norfolk, Virginia to Lenora and J.L. McCall. After his parents divorced, he was raised by his mother and his stepfather, Bonnie Alvin. He graduated from Manor High School in Portsmouth, Virginia in 1973, and began attending college, but his participation in an armed robbery resulted in him being sent to prison for three years. After he was released, he began to turn his life around. His passion for writing led him to pursue a career in journalism, and he received his B.A. degree in journalism from Norfolk State University in 1981.

McCall’s first job as a reporter was for the The Virginian Pilot-Ledger Star in Norfolk, Virginia. He also worked at The Atlanta Journal-Constitution before landing a job at The Washington Post in 1989. In 1994, McCall published his autobiography, Makes Me Wanna Holler: A Young Black Man in America, which chronicled his journey from troubled youth to successful journalist. This was followed by a book of essays on race relations, What’s Going On, in 1997, and his first novel, Them, in 2007. In addition to writing, McCall also serves as a senior lecturer in the African American Studies Department at Emory University in Atlanta, Georgia.

McCall’s books have been the recipients of numerous awards and honors: Makes Me Wanna Holler was a New York Times bestseller and named the Blackboard Book of the Year for 1995. Them reached number one on the Essence magazine bestseller list and was one of Publishers Weekly’s best books of 2007. In addition, the novel was a finalist for the 2008 Townsend Prize for Fiction, a nominee for the Ernest J. Gaines Award for Literary Excellence, and a finalist for the 2008 Hurston/Wright Legacy Award for Debut Fiction.

McCall has three children: Monroe, Ian, and Maya. He lives in Atlanta, Georgia with his wife.

Nathan McCall was interviewed by The HistoryMakers on February 19, 2014.

See how Nathan McCall is related to other HistoryMakers
Donate Now
Click Here To Explore The Archive Today!