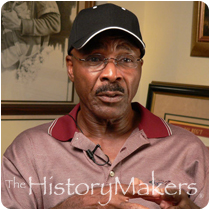 See how Nathan Jones is related to other HistoryMakers
Donate Now

Artist and inventor Nathan Jones was born on June 27, 1942, in Shreveport, Louisiana, to Bertha Lee Jones and Eunice Jones. When Jones was young, his family moved to West Dallas, Texas, where he lived with his cousin, Helen. With the encouragement of his mother, he began painting at the age of seven. Jones attended George Washington Carver grade school, then CF Carr, and Fanny C. Harris schools. Jones went to James Madison High School, where he met his future wife. After his high school graduation, Jones attended Texas Southern University, where he first became aware of another black artist, Dr. John Biggers.

After attending Texas Southern University, Jones moved to Columbus College of Art and Design, where he learned about art history and theory. He entered the University of Texas at Arlington, where he studied two years of architecture, earning a two-year certification in architecture; he also earned his B.F.A. degree while attending the University of Texas at Arlington. Jones also attended El Centro College,the University of Dallas for special training in lithography, Eastfield College in order to study printing and also Richland College. He spent a total of ten years in school studying. In 1975, Jones’s first museum show was held at the Midland Museum of Fine Arts; he was an instant success, selling around twenty-five paintings for $30,000. Jones continued to have shows in Houston throughout the 1970s and became financially successful.

In 1981, Jones designed a commemorative U.S. postage stamp for Dr. Charles Drew; that same year, Jones became the creator of the cover for the 1981-82 Southwestern Bell Telephone Directory. Jones had been interested in inventions since childhood, and as an adult began to strive towards patenting some of his own. Jones invented a simple device called the Multi Caddy, which cleans most golf equipment; he then founded MultiGolf Systems International of Texas, LP, a company devoted to selling his invention. Subsequently Jones has patented a total of five inventions which have gone into production for commercial retail. In 1992, Jones founded N.J.K. Properties, Inc., beginning his own architectural business and designing a number of buildings in Texas, which include the Fitzhugh Apartment Complex. Jones has also developed an authentic historical art series, the Buffalo Soldier Series, based on nine years of research into the history of African American soldiers.

See how Nathan Jones is related to other HistoryMakers
Donate Now
Click Here To Explore The Archive Today!