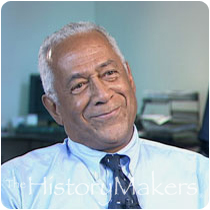 See how Nathan Conyers is related to other HistoryMakers

Nathan G. Conyers, founder and president of Conyers Riverside-Ford, Inc., was born on July 3, 1932, in Detroit, Michigan's "Black Bottom" community during the Great Depression. Nathan Conyers was the fourth of five children and one of four surviving sons of his parents John Conyers, Sr. -- a factory worker and union organizer -- and Lucille Simpson Conyers. Both parents emphasized education and self-reliance. His eldest brother is Michigan Congressman John Conyers, Jr.

Conyers graduated from Northwestern High School in 1950. A brief stint with the Army made him realize the importance of education. Attending Wayne State University to earn first a bachelor's and then a law degree, Nathan Conyers passed the Michigan Bar in 1959. He served as a special assistant attorney for Michigan's Attorney General, and as a closing attorney for the Veteran's Administration and the Small Business Administration. In 1960, he went into private practice with the firm of Keith, Conyers, Anderson, Brown and Wahls, P.C., a historic firm that championed civil rights and earned a stellar reputation.

Heeding the lifelong wish of his father that a family business be established, in 1970 Nathan Conyers and his brother John launched Conyer's Ford at 2475 West Grand in inner city Detroit with Nathan Conyers as president. At the time, there were only twenty black-owned dealerships in the United States. With the assistance of Reverend Jesse Jackson Sr., Conyers helped forge the National Black Dealers Association and became its first president in 1970. In 1979, Conyers established the Ford Lincoln Mercury Black Dealers Association. In May of that same year, minority dealers met with the goal of leveraging much needed financial support from federal agencies. As a result of this effort, the National Minority Dealership Association was formed. In 1984, Conyers acquired Riverside Ford, Inc. at 1833 East Jefferson and later converted the dealership on West Grand to a body shop.

Known for his thirty-one years of professionalism and distinguished community service, Conyers is the longest serving African American car dealer in the country. He is the recipient of Time Magazine's Quality Dealer Award, and is one of only six businesses to make Black Enterprise Magazine's Top 100 list for the last twenty-five years.

See how Nathan Conyers is related to other HistoryMakers
Click Here To Explore The Archive Today!