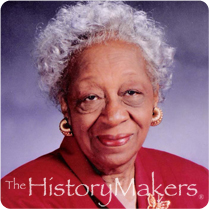 See how Narvie Harris is related to other HistoryMakers

Narvie Jordan Harris began her career as an educator in a one-room schoolhouse in rural Georgia. Her father, James Jordan, was a prominent Atlanta photographer and tailor. Harris chose education as her field and rose through the educational system to become an administrator of schools in the Georgia Public School System through the Jeannes Supervisors Program.

Harris was appointed by former Georgia Governor George Busbee to travel to West Africa for educational study for Northwestern University. During her lifetime, Harris traveled to every continent except Australia. Harris retired from the DeKalb County Georgia School System in 1983 after thirty-nine years of teaching. In 1985, Harris was named an honorary Associate Superintendent by the DeKalb County Board of Education. Narvie J. Harris Traditional Theme School, an elementary school in the DeKalb County Schools System, was named in her honor in 1999. Harris is the author of African-American Education in DeKalb County, a personal collection of her tenure as an educator/administrator.

Harris was active in numerous religious, civic and social organizations including Wheat Street Baptist Church, the Atlanta Alumnae Chapter of Delta Sigma Theta Sorority, Inc., Nancy Bridge Club, Fulton County Arts Council and Decatur-DeKalb, Rockdale Retired Teachers and Georgia Retired Teachers Associations of which she was a past president. Her honors and awards include the Bronze Woman of the Year in Education by the Schools of DeKalb County, the Distinguished Alumni Achievement Award from Clark College and Atlanta University, and trees were planted in her honor at Carver High School in Columbus, Georgia and C.L. Harper High School in Atlanta, Georgia.

Harris married the late Joseph L. Harris and is the mother of Daryll Harris Griffin and the grandmother of Michael Joseph Griffin.

See how Narvie Harris is related to other HistoryMakers
Click Here To Explore The Archive Today!