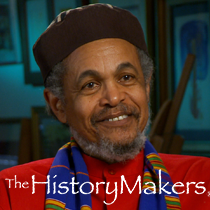 In 1968, during the apex of the Chicago Black Arts Movement, Jones-Henderson became involved with a Chicago-based artists’ collective called COBRA (Coalition of Black Revolutionary Artists). The collective changed their name in 1969 to AfriCOBRA (African Commune of Bad Relevant Artists). During the formative years of AfriCOBRA, Jones-Henderson created large pictorial weavings that were included in the group’s important series of exhibitions mounted at the Studio Museum in Harlem in the early 1970s. He has been an active member of AfriCOBRA since 1969 and is the longest standing member of the group. In 2011, Jones-Henderson produced Africobra: Art for the People (2011), a documentary about the groups’ involvement with the 1960s Black Arts Movement.

Jones-Henderson became the Executive Director of the Research Institute of African and African Diaspora Arts, Inc., in Roxbury, Massachusetts in 1979. He then went on to serve in various academic positions at Malcolm X College in Chicago, the Massachusetts College of Arts, Emerson College in Boston. Jones Henderson was appointed adjunct artist critic and lecturer at the Vermont College of Norwich University in Montpelier, Vermont in 1989. In addition, Jones-Henderson served as an artist-in-residence at Towson University, Syracuse University, and the McDonough School. In 2005, Jones-Henderson was appointed associate professor of art at Benedict College in Columbia, South Carolina. His artwork is housed at the DuSable Museum of African American History, Schomburg Cdner of Research in Black Culture, Southside Community Art Center, Hampton University Museum, Art Institute of Chicago, and the Studio Museum in Harlem.


In recognition of his art, Jones-Henderson received the Merit of Honor Award from the Walters Art Museum and the Award for Outstanding Recognition from the Museum of Science and Industry. He was also honored by the National Conference of Artists with the Award of Excellence.

Napoleon Jones-Henderson was interviewed by The HistoryMakers on April 22, 2013.

See how Napoleon Jones-Henderson is related to other HistoryMakers
Donate Now
Click Here To Explore The Archive Today!