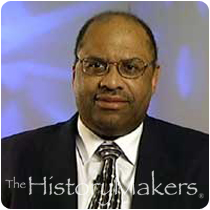 See how Napoleon Brandford, III is related to other HistoryMakers

After completing his graduate work, Brandford became an assistant finance director in the Dade County Finance Department, where he remained until 1982. That year he joined Shearson Lehman Brothers, Inc., as the vice president of public finance in the San Francisco office. In 1985, Brandford partnered with Calvin Grigsby to form Grigsby Brandford & Co., which became one of the nation's premier investment banking firms. While there, Ebony named Brandford one of its Young Tycoons in 1988. In 1997, Brandford and another partner from Grigsby Brandford & Co., Suzanne Shank, joined with Muriel Siebert to form Siebert Brandford Shank, Inc. Today, it is one of the largest female- and minority-owned investment banking firms in the world, with Brandford serving as chairman.

Brandford holds the distinction of being named the youngest African American partner on Wall Street, and he is active with a number of organizations. He serves on the boards of the National Collegiate Athletic Association's Finance and Investment Committee, the Western Region of the Boy Scouts of America and the Los Angeles American Heart Association. Brandford is also active in the National Forum of Black Public Administrators and the National Association of Security Professionals. Brandford and his wife, Sharon, live in California.

See how Napoleon Brandford, III is related to other HistoryMakers
Click Here To Explore The Archive Today!