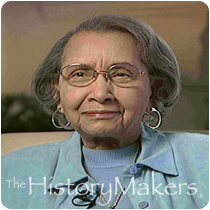 Poet and English professor emeritus Naomi Cornelia Long Madgett was born on July 5, 1923 in Norfolk, Virginia to the Reverend Clarence Marcellus Long and the former Maude Selena Hilton. Growing up in East Orange, New Jersey, she attended Ashland Grammar School and Bordentown School. At age twelve, Madgett’s poem, My Choice, was published on the youth page of the Orange Daily Courier. In 1937, the family moved to St. Louis, Missouri where her schoolmates included Margaret Bush Wilson, E. Sims Campbell and lifelong friend, baritone Robert McFerrin, Sr. Madgett, at age fifteen, established a friendship with Langston Hughes. Just days after graduating with honors from Charles Sumner High School in 1941, Madgett’s first book of poetry, Songs to a Phantom Nightingale was published. She attended Virginia State University during World War II and graduated with her B.A. degree in 1945.

Madgett attended graduate school at New York University. In 1946, she married and moved to Detroit, Michigan where she worked as a copywriter for the Michigan Chronicle and the Michigan Bell. In 1949, her poem Refugee appeared in The Poetry of the Negro, 1746-1949 and in 1950, several of her poems were featured in American Literature by Negro Authors. Occasionally, Madgett read her poetry for the Detroit Study Club. After marrying William H. Madgett in 1954, she earned her M.Ed. from Wayne State University in 1955. Madgett taught at Northwestern High School, while two other books; 1956’s One and the Many and 1965’s Star by Star gained local accolade. Madgett joined a group of black Detroit writers including Margaret Danner, Oliver LaGrone, Dudley Randall, Harold G. Lawrence, Edward Simpkins, Gloria Davis, Alma Parks, James Thompson and Betty Ford who met at Boone House. They were featured along with James Edward McCall and playwrights Powell Lindsay and Woodie King, Jr. in the October 1962 issue of the Negro History Bulletin. Madgett’s poetry was also published in the Negro Digest and Hughes’s 1964 anthology, New Negro Poets: U.S.A. In 1965, she was awarded the Mott Fellowship in English.

In 1968, Madgett was included in Ten: Anthology of Detroit Poets and joined the faculty of Eastern Michigan University where she wrote A Student’s Guide to Creative Writing. Madgett’s 1971 African travels inspired the poems Phillis, and Glimpses of Africa. She earned her Ph.D. from Greenwich University in 1980. Octavia and Other Poems was published in 1988 by Third World Press. Madgett formed Lotus Press in 1972 and published her own book, Pink Ladies in the Afternoon. She edited the acclaimed Adam of Ife: Black Women in Praise of Black Men in 1992. Madgett is the recipient of many honors including 1993’s American Book Award and the George Kent Award in 1995.

Madgett was made Detroit’s Poet Laureate by Mayor Dennis Archer.

See how Naomi Long Madgett is related to other HistoryMakers
Donate Now
Click Here To Explore The Archive Today!