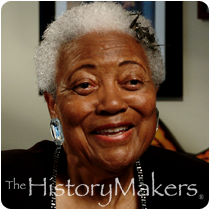 Favorite Color:
Blue
Favorite Food:
Greens (Collard)
Favorite Time of Year:
Fall
Favorite Quote:
This Is The Day That The Lord Has Made. We Will Rejoice And Be Glad In It.

Favorite Color:
Blue
Favorite Food:
Greens (Collard)
Favorite Time of Year:
Fall
Favorite Quote:
This Is The Day That The Lord Has Made. We Will Rejoice And Be Glad In It.

See how Naomi King is related to other HistoryMakers
Donate Now

Civil rights activist Naomi King was born in Dothan, Alabama, on November 17, 1931 to a single mother, Bessie Barber Bailey. Her mother, a cook in a prominent Atlanta home, taught her social graces. King, educated in Atlanta Public Schools, excelled in French and English. As a young woman, King was often selected by local clothing stores as a preferred fashion model, at times featured in shop windows. King and her mother belonged to the Ebenezer Baptist Church, where Martin Luther King, Sr. served as senior pastor. At the church, King became acquainted with the pastor’s children, and she caught the eye of his youngest son, A.D.

In 1949, King entered Spelman College, where she spent a year studying French before marrying A.D. Williams King, Baptist minister, civil rights activist, and youngest son of Martin Luther King, Sr., in 1950. She later attended the University of Alabama and studied interior design. She would have five children: Alfred D.W. King III; Alveda King; Esther Darlene King; Reverend Vernon King of Charlotte, North Carolina; and Reverend Derek B. King of Indianapolis, Indiana. King lived most of her life as a mother and First Lady. She brought musical concerts, women’s enrichment programs, and tools for living to her husband’s congregations. Together, she and her husband supported Martin Luther King, Jr., when, in 1955, Rosa Parks was arrested for refusing to move to the back of the bus in Montgomery, Alabama; at the creation of the Southern Christian Leadership Conference (SCLC) in 1957; when students in Greensboro, North Carolina, launch the sit-in movement in 1960; through the Birmingham campaign of 1963; during 1963’s “March on Washington for Jobs and Freedom”; and throughout 1965’s campaign to vote in Selma. Toward the end of the campaign in Birmingham, on May 11, 1963, a bomb destroyed the Gaston Motel, where Martin Luther King, Jr. was staying, and another damaged the home of Naomi and A.D. King.

On April 4, 1968, Martin Luther King, Jr., was assassinated in Memphis, Tennessee. This tragedy was soon followed by the death of King’s husband, A.D., in 1969; on July 21, King and her children were vacationing in Nassau when A.D. drowned in their home swimming pool. On July 30, 1974, King’s mother-in-law, Alberta Christine Williams King, was murdered by deranged gunman Marcus Chenault as she played the Lord’s Prayer at Ebenezer Church. In 1976, King’s younger daughter, Darlene died while jogging from an apparent heart attack, and ten years later, her son Al died in the same manner. In 1984, King’s father-in-law, Martin Luther King, Sr., passed away from a heart attack, and in 2006, she lost her sister-in-law, Coretta Scott King, to advanced stage ovarian cancer. Despite these losses, King has kept her husband’s memory alive through her establishment of the A.D. King Foundation in 2008. She received the SCLC Rosa Parks Freedom Award in January 2008.

Naomi King was interviewed by The HistoryMakers on July 14, 2010.

See how Naomi King is related to other HistoryMakers
Donate Now
Click Here To Explore The Archive Today!