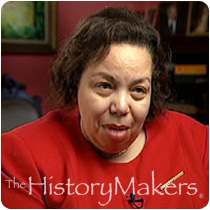 See how Nannette Kindle Mitchell is related to other HistoryMakers

Nannette Kindle Mitchell was born in Philadelphia on September 16, 1946, but moved to Richmond, Virginia, a year later after her father completed his master's degree at the University of Pennsylvania. In 1951, Mitchell entered kindergarten at the school behind her home, a school that until that year had been an all-white school. Three years later, her uncle, Oliver Hill, moved into the house next door. Hill was a civil rights attorney who had written part of the Brown vs. Board of Education argument. The Ku Klux Klan burned crosses in their yards following Hill's arrival, and Mitchell's family was placed under police protection. During that time, her father would often sit outside her uncle's house with a gun to ensure that her uncle arrived safely home.

That same year, Mitchell was expelled from school because her parents refused to sign a document saying that the Board of Education could place students in any school it saw fit. The African American community pulled together, and the students continued their education in a church, with parents who worked as teachers writing the curriculum and stay-at-home parents teaching. Graduating from high school in 1964, Mitchell saw many of her friends arrested during sit-ins and protests.

Today, Mitchell works as a management assistant in the Baltimore County government. She has spent time working with the Baltimore Police Department and is now with the Department of Social Services. She is also still aware of the racial polarization of the country and has given speeches on the subject. Mitchell continues to counsel her children much the way her parents did her. She is also active in her community of Baltimore, serving on the Board of Trustees of the Franciscan Center, which provides emergency outreach and supportive assistance to the poor. Mitchell lived through a turbulent time and continues to fight for equality for all.

See how Nannette Kindle Mitchell is related to other HistoryMakers
Click Here To Explore The Archive Today!