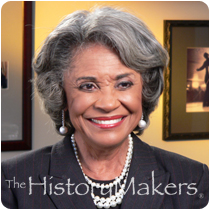 See how Nancy Wilson is related to other HistoryMakers

Nancy Wilson was born on February 20, 1937 in Chillicothe, Ohio, to Olden Wilson, an iron foundry worker, and Lillian Ryan. Wilson attended Burnside Heights Elementary School and developed her singing skills by participating in church choirs. She attended West High School in Columbus, Ohio where she won a talent contest and was rewarded with a role as a host for a local television show. She then went on to attend Ohio’s Central State University where she pursued her B.A. degree in education.

In 1956, Wilson auditioned and won a spot as a vocalist for Rusty Bryant’s Carolyn Club Band. Afterwards, she moved to New York where she began working as a secretary at the New York Institute of Technology. While in New York, Wilson became friends with jazz saxophonist “Cannonball” Adderley who introduced her to her manager John Levy. With Levy’s help, she landed a record deal with Capitol Records and released her songs “Guess Who I Saw Today” and “Sometimes I’m Happy.” After touring and performing at the Coconut Grove in Los Angeles, California and the Sahara Hotel in Las Vegas, Nevada, Wilson’s album Tell Me The Truth was released, and the following year, she won a Grammy Award for her album How Glad I Am. Wilson was the host of the Nancy Wilson Show from 1967 to 1968 and has appeared on several television shows and films throughout her career including I Spy and The Cosby Show.

After Wilson won her second Grammy Award with her album the Nancy Wilson Show, she went on to record overseas in Japan. In 1983, she was declared the winner of the annual Tokyo Song Festival. During the 1980s, Wilson released several albums including The Two of Us, Forbidden Lover and her fifty-second released album A Lady With A Song. Wilson was honored with a star on the Hollywood Walk of Fame in 1991 and in 1992, she was presented with the Whitney Young Jr. Award by the National Urban League. In 1994, after winning the Turner Broadcasting Trumpet Award for Outstanding Achievement, her album Love, Nancy was released. In the late 1990s, she became involved with MCG Jazz, a youth education program and a non-profit, minority-directed, arts and learning organization located in Pittsburgh, Pennsylvania. Wilson was inducted into the Big Band and Jazz Hall of Fame in 1999 and from 1996 to 2005, she was the host of the Washington, D.C based radio program, The Jazz Profiles. In 2007, Wilson celebrated her seventieth birthday with an all-star event hosted by Arsenio Hall.

Nancy Wilson was interviewed by The HistoryMakers on November 15, 2007.

See how Nancy Wilson is related to other HistoryMakers
Click Here To Explore The Archive Today!