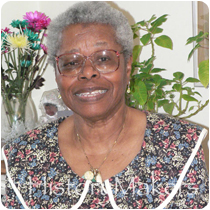 See how Nancy Bowlin is related to other HistoryMakers
Donate Now

Educator and public health nurse Nancy Bowlin was born on August 8, 1927 in Harlem, New York to Harriet Seraphina Worghs and Phillip Worrell Douglas. Her parents met in Harlem in 1924. Bowlin attended P.S. #10, St. Thomas the Apostle Elementary School, Asbury Park High School and graduated from George Washington High School in 1945. She received her associate’s degree from Brooklyn College in 1947 and graduated from Bellevue School of Nursing in 1952 as a registered nurse. Bowlin went on to earn her B.S. degree in home economics and M.S. degree in health education from Lehman College in the 1970s.

Bowlin worked as a nurse at Bellevue Hospital from 1952 to 1954. As a state public health nurse for the State of New York in Harlem from 1954 to 1958, Bowlin assessed family health and taught neo-natal care. Later, she was appointed Supervisor of Nursing Education for the federally funded Central School for Practical Nursing. In 1969, Bowlin joined the New York City Board of Education, where she taught home economics at P.S. #142 and later taught bio medical sciences, nursing and biology at the high school level until 1984.

Bowlin is a member of the United Negro College Fund, the NAACP and the Schomburg Center for Black Research. She lives in Bronx, New York.

Bowlin was interviewed by The HistoryMakers on April 17, 2007.

See how Nancy Bowlin is related to other HistoryMakers
Donate Now
Click Here To Explore The Archive Today!