Information about Najwa I 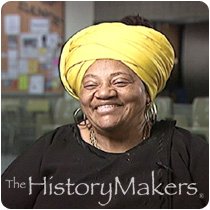 See how Najwa I is related to other HistoryMakers
Donate Now

Arts administrator and dancer Najwa I was born Arnell Pugh in Clarksdale, Mississippi. Her parents, Ruby and Timothy Pugh, soon moved to Chicago where Najwa attended Medill, Smith and Howland elementary schools. As a young woman, she took dance classes at the Marcy Newberry Association in the Maxwell Street area. Under the instruction of the late Panamanian performer, Jimmy Payne, Najwa studied Afro-Cuban and Calypso dance while still in high school. She started at Farragut High School, but graduated from Harrison High School in 1954.

Soon after graduation, Najwa was approached by impresario Larry Steele’s Smart Affair tour. Taking her first airplane ride, Najwa was flown to Australia, where she joined Steele’s group on the road. Najwa performed in Australia and New Zealand and continued on extended international tour with Larry Steele through the mid-fifties. In her travels she learned the dance styles of different nations and peoples. Najwa performed in swing productions with icons like Duke Ellington and Count Basie. In New York City, her study of African dance was enriched by Asadata Dafora, Baba Dinizulu, Babatunde Olatunji, and Carmencita Romero. At the Cat and Fiddle Club in the Bahamas, Najwa learned to dance with fire. Performing with Julian Swain, she also taught ethnic dance at the Julian Swain Dance Theatre and at Chicago’s Better Boys Foundation.

In 1977 she founded the Najwa Dance Corps in Chicago. The group presents a repertoire that spans the rituals of traditional Africa to the glamorous chorus girls of the swing era. As artistic director, Najwa is also a gifted choreographer and dance historian. The group offers classes in Dances of West Africa, Dances of the Caribbean and Dances of Contemporary African American Culture and holds public workshops, master classes, concerts, two-week residencies, and ensemble performances. The recipient of the Woman in Dance Award, the Woman of the Year Award and the African American Arts Alliance’s Paul Robeson Award. The name Najwa means “one who is spiritually in tune” and because others have named daughters after her, she is now known as Najwa I.

See how Najwa I is related to other HistoryMakers
Donate Now
Click Here To Explore The Archive Today!