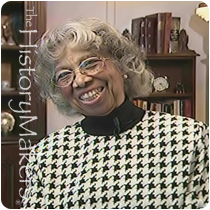 See how Nadine P. Winter is related to other HistoryMakers
Donate Now

Former Washington, D.C. City Council member Nadine Poole Winter, founder of Hospitality House and Health Action Information Network, was born in New Bern, North Carolina on March 3, 1924. The daughter of Elnora Kenyon Poole and Sam Poole, Winter grew up in North Carolina and attended public school in Winston-Salem, where her family ran a brickyard. She graduated from Atkins High School in 1941 and enrolled in Livingstone College in nearby Salisbury, North Carolina. From there, she went to New York City where she worked as a cook while attending Brooklyn College. It was then that she first became involved as a community activist by opening a storefront community center to foster cultural understanding in her neighborhood.

In 1945, Winter came to Washington, D.C. to work on her master’s thesis on urban renewal at Federal City College. In D.C., she opened a center similar to her Brooklyn facility, which she called “Unity.” Throughout the 1950s, Winter worked in various positions in the federal government, yet remained committed to her outside organizing projects. In 1959, she founded Hospitality House, an organization helping low-income families in Washington, D.C. Winter’s community involvement ultimately led to her role in city government. Winter represented Ward 6 on the D.C. Council from 1974 to 1990. Her ward encompassed much of Anacostia and part of Northeast Washington, including the H Street corridor. After retiring from government, she founded Health Action Information Network, a non-profit agency providing health education and a community resource.

Winter belongs to the National Association of Social Workers. She is a founding member of the National Congress of Black Women and a member of the Self-Determination for D.C. Coalition. She is active in the community of breast cancer survivors and participates in many other activities and organizations.

See how Nadine P. Winter is related to other HistoryMakers
Donate Now
Click Here To Explore The Archive Today!