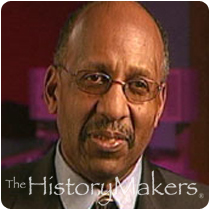 See how N. John Douglas is related to other HistoryMakers
Donate Now

Broadcast chief executive N. John Douglas was born in New York City in 1938, the son of Mae, a registered nurse, and John, a teller. In 1960, Douglas received his B.S. degree in physics from Bates College in Lewiston, Maine. At Bates, he participated in athletics and still holds the long jump record for a New England college athlete.

After earning his M.S. degree in physics from Howard University in 1962, Douglas worked as a senior scientist at Lockheed Research Laboratories in Palo Alto, California. He worked there until 1968, winning the Lockheed Corporation Publication Award in both 1967 and 1968. Douglas entered the world of business in 1968 at the Bank of America, becoming the first African American security analyst at a major financial institution. That same year, he studied business administration at the University of Santa Clara and investment analysis and management at the University of California, Berkeley. Douglas continued working as a security analyst and in managerial positions, for various companies and brokerage houses until 1981.

Since then, Douglas has been highly successful in the field of broadcast programming and operations. In 1981, he founded KSTS-TV, Channel 48 in San Jose, California, the first African American-owned television station in the United States. He also served as the creator and news director of Business Today, the first nationally syndicated daily business news program to air on stations in the top five markets and on a cable network reaching six million homes. Douglas is also the founder and chairman of Douglas Broadcasting, Inc., a twenty-five station radio broadcast group created in 1989.

Presently, Douglas is the president and CEO of AIM Broadcasting. AIM focuses on ethnic audiences with radio stations throughout the United States.

See how N. John Douglas is related to other HistoryMakers
Donate Now
Click Here To Explore The Archive Today!