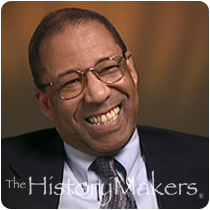 Favorite Color:
Blue
Favorite Food:
Spaghetti, Meat Sauce
Favorite Time of Year:
Summer
Favorite Quote:
I might can do it.

Favorite Color:
Blue
Favorite Food:
Spaghetti, Meat Sauce
Favorite Time of Year:
Summer
Favorite Quote:
I might can do it.

See how N. Don Wycliff is related to other HistoryMakers
Donate Now

Newspaper editor and columnist N. Don Wycliff was born in Liberty, Texas on December 17, 1946. Driven by the dearth of employment and educational opportunities for African Americans in Texas, Wycliff's parents moved their family to Kentucky in 1954. Wycliff graduated from the University of Notre Dame in 1969. While attending graduate school on a Woodrow Wilson Fellowship at the University of Chicago, Wycliff was riveted by local news organizations' coverage of a police raid on the Black Panthers' headquarters on the West Side. Deciding on journalism as a career, Wycliff returned to Texas and accepted a position as a general assignment reporter at the Houston Post.

Wycliff worked as a reporter in Ohio, Illinois, and Washington, before becoming region section editor and assistant to the editor at the New York Times: Week in Review. As a board member of the Times' editorial page from 1985 to 1990, Wycliff addressed an array of issues, including religion, race relations, social policy, and education. Wycliff joined the Chicago Tribune's editorial staff in 1990; under his leadership, the paper won numerous awards, including a Pulitzer Prize and two Distinguished Writing Awards from the American Society of Newspaper Editors. A member of the Chicago Journalism Hall of Fame, Wycliff received writing awards and evaluated others' work for the Pulitzer Prize and other honors.

From 2000 on, Wycliff worked as a Tribune columnist and the newspaper's public editor; fielding comments about its reporting, writing, and editing. In these positions, Wycliff unflinchingly reflected on variety of topics; advocating objectivity and justice. Wycliff served on advisory councils at Notre Dame and Northwestern universities, and at the national associations of minority media executives and black journalists. In Evanston, Illinois, where he lived with his wife, Catherine, and sons Matthew and Grant, Wycliff served as a Cub Scout leader, sports coach, and member of St. Mary's church Parish Pastoral Council.

See how N. Don Wycliff is related to other HistoryMakers
Donate Now
Click Here To Explore The Archive Today!