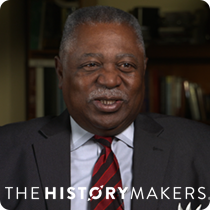 "We’re Here To Serve, Not To Be Served"

Anderson started working at Piedmont Natural Gas in 1972 as a mail clerk when he became involved with the Charlotte NAACP Youth Council, where he later served as president. There, he helped organize the NAACP Youth Council radio show, “Talk to the People” on WGIV Radio in Charlotte, North Carolina and co-hosted the NAACP television program, “Experience!” In 1974, Anderson was hired as a sales representative for American Tobacco Company and later moved to Detroit. After graduating from Wayne State University, Anderson joined the NAACP Detroit Branch as its youth director in 1981. He then served on the national staff as director of the NAACP Midwest Region III from 1983 to 1987. In this role, he directed and managed NAACP state conferences as well as adult branches and college and youth councils in seven states including Illinois, Indiana, Kentucky, Michigan, Ohio, Wisconsin and West Virginia. Anderson served as the sixth president and chief executive officer of the Detroit Urban League from 1987 to 1994. In 1994, Anderson was appointed by Detroit Mayor Dennis Archer to serve as executive director of the Department of Human Services for the City of Detroit, a position he held until 1997. In 1997, he rejoined the Urban League of Detroit and Southeastern Michigan as the organization’s eighth president and chief executive officer. For twenty years, he was responsible for the vision, leadership and direction of the Urban League of Detroit and Southeastern Michigan, which is one of 110 affiliates of the New York-based National Urban League.

Anderson and his wife, Marionette Anderson, have three daughters and nine grandchildren.

N. Charles Anderson was interviewed by The HistoryMakers on October 17, 2017.