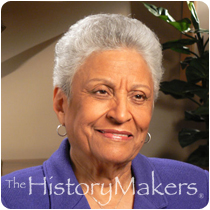 See how Myrtle Davis is related to other HistoryMakers
Donate Now

Pharmacist and veteran city council member Myrtle Reid Davis was born on October 9, 1931 to Emmalee Reid, a teacher, and Carl Reid, a postal worker. Davis was raised in Rock Hill, South Carolina where she attended Emmett School Elementary and High School. After graduating from high school in 1949, Reid went on to attend Xavier University in New Orleans, Louisiana where she pursued her B.S. degree in pharmacy.

In 1953, Davis was hired at the Queens City Pharmacy in Charlotte, North Carolina. In 1956, she moved to Atlanta, Georgia where she was hired by the Triangle Prescription Shop. That following year, she was married to activist and local physician, Dr. Albert M. Davis.

Throughout the 1960s, Davis served on the boards of numerous Atlanta based organizations including the League of Women Voters of Fulton County, where she served as president. She also served on the board of directors for the Gate City Day Nursery Association, and in 1970, she was elected to serve on the board of directors for the Atlanta Urban League. In 1979, Davis was hired by Leadership Atlanta where she worked as co-executive director for ten years.

In 1981, Davis ran for public office and was elected as a member of the Atlanta City Council. During her tenure on the Atlanta City Council, Davis served as chair of the Human Resources Committee, the Water and Pollution Committee and the Community Development Committee. Davis also served for five years as chair of the Finance Committee. Then, in 1994, after Maynard Jackson decided to leave his post as mayor, she became a candidate for mayor of the City of Atlanta. She later became the coordinator for the 1996 Atlanta Expo, and in 1998, Davis retired from city government as water utility manager for the City of Atlanta.

Davis’ other affiliations include the Kiwanis Club of Atlanta, the National Board of Girl Scouts, the United Way of Metropolitan Atlanta, the Task Force for the Homeless and the City of Atlanta’s Board of Ethics.

Davis lives in Atlanta, Georgia with her two daughters, Judge Stephanie C. Davis and Stacey Davis Stewart. Stephanie is a judge in the Magistrate Court of Fulton County, and Stacey is the senior vice president of Fannie Mae.

Davis was interviewed by The HistoryMakers on February 28, 2008.

See how Myrtle Davis is related to other HistoryMakers
Donate Now
Click Here To Explore The Archive Today!