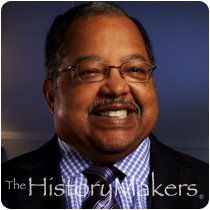 See how Myron Lowery is related to other HistoryMakers
Donate Now

City Council Member and former Mayor pro tempore Myron Lowery was born in 1947, in Columbus, Ohio. He received his B.A. degree from LeMoyne-Owens College and his M.S. degree from New York University. While at New York University, he taught for three years in New York public school with the National Teachers’ Corp. At Dr. Hollis Price’s invitation, Lowery went to works as an anchor at WMC-TV in 1973, where he remained until 1983.

Lowery sued WMC-TV for racial discrimination in 1981, making a successful settlement that paved the way for many other employment discrimination suits by African Americans. He then went on to work as press secretary for Congressman Harold Ford Sr. and as manager of corporate relations at FedEx. In 1991, Lowery ran for Memphis City Council and won. Five years later, he was a speaker at the Democratic National Convention when President Bill Clinton won the Democratic primary. He also served as a superdelegate at the Democratic National Convention in 2008, at which Barack Obama won the Democratic primary. In his role on City Council, Lowery has initiated a successful gun buy-back program, the installation of red light cameras at busy intersections, and the reform of some of the City Council’s discussion processes.

In 2009, the mayor of Memphis, Willie Wilbur Herenton, resigned from his post as mayor, leaving Lowery as mayor pro tempore for the next ninety days. During that time, Lowery sought to promote transparency in city government, asking many officials from Herenton’s corrupt administration to resign.

Lowery is a member of the board of directors for the National League of Cities. He has been a member of the board of many civic organizations, including the Tennessee Municipal League, Leadership Memphis, The Memphis Zoo, and the Headstart Policies Council. He has also served as vice president of the National Association of Black Journalists, chairman of the Democratic Municipal Officials, and treasurer of the United Negros’ College Fund’s National Alumni Council. He holds an honorary degree from Southeastern College of Technology. Lowery has been honored as one of the Three Outstanding Young Men in the state of Tennessee and Ten Outstanding Young Men in America by the Tennessee Jaycees, and in 2003, he was inducted into the National Black College Alumni Hall of Fame.

See how Myron Lowery is related to other HistoryMakers
Donate Now
Click Here To Explore The Archive Today!