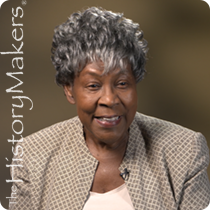 Favorite Color:
Black
Favorite Food:
Vegetables
Favorite Time of Year:
Spring or Fall
Favorite Vacation Spot:
Atlanta and Shreveport
Favorite Quote:
Never look down on a man unless you are picking him up.

Favorite Color:
Black
Favorite Food:
Vegetables
Favorite Time of Year:
Spring or Fall
Favorite Vacation Spot:
Atlanta and Shreveport
Favorite Quote:
Never look down on a man unless you are picking him up.

See how Myrna Jackson is related to other HistoryMakers

Civic leader Myrna Jackson was born on July 9, 1941 in Birmingham, Alabama to Willie George Carter and Willie Lee Ledger. She graduated from A.H. Parker High School in 1958 at the age of sixteen years old, and attended Barbara Durr Beauty College in 1965, and became a licensed cosmetologist. She later attended Lawson State Community College in Birmingham, Alabama, and graduated from Miles College in Fairfield, Alabama with her B.S.W. degree in 2000.

Jackson was active in the civil rights movement in Birmingham and served as the first vice president of the Metro Birmingham Branch of the NAACP. After the 1963 bombing of the 16th Street Baptist Church, Jackson participated in the Children’s March and the Monday Masses, organized by the Alabama Christian Movement for Human Rights led by Reverend Fred Shuttlesworth. In 1963, Jackson was jailed twice and held in the Birmingham Jail, during the demonstrations that took place after the bombings.

After attending Lawson State Community College, Jackson became a certified substitute teacher and taught at several schools in Birmingham, before working for Macy’s and Parisian’s department stores where she remained for ten years. Jackson left Parisian’s and enrolled at Miles College. After graduation, she worked for workforce development to help provide social services after Hurricane Katrina. She later joined Birmingham Works for Youth to provide job training and skills for school-age children. Jackson then campaigned for Shelia Smoot during her run for Jefferson County Commissioner for District Two. Jackson was then appointed commissioner of the Housing Authority of the Birmingham District by Mayor William Bell. Jackson also helped organize the 2009 conference between youth and law enforcement between the Birmingham Civil Rights Institute and the Federal Bureau of Investigation. In 2017, Jackson helped commemorate the Birmingham Civil Rights National Monument. In 2018, Jackson served as interim president of the Birmingham NAACP.

Jackson was a member of the Top Ladies of Distinction who worked with Top Teens of America to provide scholarships and funding for students.

In 2013, Jackson was honored along with several other women on the fiftieth anniversary of the Civil Rights Movement by the Metro Birmingham Branch of the NAACP.

Myna Jackson was interviewed by The HistoryMakers on May 1, 2017.

See how Myrna Jackson is related to other HistoryMakers