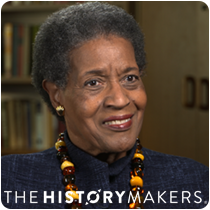 Favorite Color:
A Combination
Favorite Food:
Thankful I Can Eat Most Foods
Favorite Time of Year:
Spring
Favorite Vacation Spot:
The Bahamas, and Anywhere I Can Find Peace
Favorite Quote:
Hush. Be Still and Know That I Am God.

Favorite Color:
A Combination
Favorite Food:
Thankful I Can Eat Most Foods
Favorite Time of Year:
Spring
Favorite Vacation Spot:
The Bahamas, and Anywhere I Can Find Peace
Favorite Quote:
Hush. Be Still and Know That I Am God.

See how Myrlie Evers-Williams is related to other HistoryMakers

Civic leader and civil rights activist Myrlie Evers-Williams was born on March 17, 1933 in Vicksburg, Mississippi to Mildred Washington Beasley and James Van Dyke Beasley. Raised by her paternal grandmother and aunt, who were both schoolteachers, Evers-Williams graduated from Magnolia High School in 1950, and enrolled at Alcorn A&M College.

She married Medgar Evers in 1951, who she met on her first day at Alcorn A&M College. The couple moved to Mound Bayou, Mississippi in 1952, where Evers-Williams worked as a secretary at Magnolia Mutual Life Insurance Company. In 1954, Evers-Williams relocated to Jackson, Mississippi, where her husband was hired as the first Mississippi field secretary for the NAACP and she worked as his secretary. In 1963, Medgar Evers was assassinated, and the following year, two all-white juries failed to reach a verdict, resulting in two mistrials. After the second trial, Evers-Williams moved to Claremont, California. In 1967, she co-wrote the book “For Us, the Living” about Medgar Evers’ life and work. Evers-Williams earned her B.A. degree in sociology from Pomona College in 1968, becoming the director of planning at the Center for Educational Opportunity for Claremont Colleges later that year. In 1969, Evers-Williams was hired as an editor and columnist for Ladies’ Home Journal , where she covered the signing of the Paris Peace Accords treaty in Paris, France. From 1973 to 1975, she worked as vice president for advertising and publicity at the advertising firm of Seligman and Latz. She became the national director for community affairs for the Atlantic Richfield Company in 1975. In 1987, Evers-Williams was appointed by Los Angeles Mayor Tom Bradley as commissioner of the Board of Public Works, a position she held until 1991. In 1994, she was named vice chair of the NAACP, serving as chairperson of the board of directors in 1995. In 1999, Evers-Williams’ autobiography, “Watch Me Fly: What I Learned on the Way to Becoming the Woman I Was Meant to Be,” was published.

Evers-Williams founded the Medgar Evers Institute in 1998, which was later renamed the Medgar and Myrlie Evers Institute. In 2001, she was featured as one of the 100 Most Fascinating Women of the Twentieth Century in Ebony magazine. She received the National Freedom Award in 2009 from the National Civil Rights Museum in Memphis, Tennessee. She also joined the board of directors of the Oregon arts education organization Caldera. In 2013, she delivered the invocation at the second inauguration of President Barack Obama. She received an honorary degree from the College of New Rochelle in 2016.

Myrlie Evers-Williams was interviewed by The HistoryMakers on December 11, 2017.

See how Myrlie Evers-Williams is related to other HistoryMakers