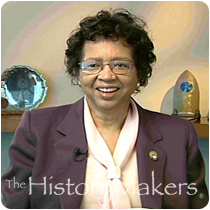 See how Myra McDaniel is related to other HistoryMakers

Myra McDaniel was born in Philadelphia, Pennsylvania to Eva and Toronto Atwell on December 13, 1932. McDaniel attended the prestigious Philadelphia High School for Girls and went on to receive her B.A degree in English from the University of Pennsylvania in 1954. McDaniel then worked several administrative jobs at Baldwin Wallace College in Ohio and at Indiana University and received her J.D degree from the University of Texas School of Law at Austin in 1975.

McDaniel was hired by the Attorney General’s Office in Texas and worked her way up to chief of the taxation division in 1979. She then worked as counsel for the Railroad Commission. McDaniel then entered private practice in Midland Texas, but Governor Mark White appointed her as General Counsel to the governor. In 1984, she became the first African American in Texas history to serve as the Secretary of State. In this position, McDaniel was also the highest- ranked African American appointee in the history of Texas government. McDaniel then entered private practice in 1987 with Bickerstaff, Heath, Smiley, Pollan, Kever, and McDaniel, L.L.P., becoming the first African American woman to lead a major law firm as managing partner in 1995.

McDaniel has received numerous awards for her outstanding community service. She is a member of the Board of Trustees of the Bishop Quinn Foundation in the Episcopal Diocese of Texas and past senior warden of Saint James Episcopal Church.

McDaniel is married to Dr. Reuben R. McDaniel, Professor of Management Science and Information Systems, at the University of Texas at Austin. McDaniel passed away on February, 25, 2010.

McDaniel was interviewed by The HistoryMakers on February 6, 2007.

See how Myra McDaniel is related to other HistoryMakers
Click Here To Explore The Archive Today!