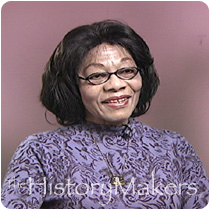 See how Muriel W. Foster is related to other HistoryMakers
Donate Now

Dance instructor and arts administrator Muriel Foster was born Muriel Burns, January 16, 1931 in Chicago, Illinois. Her mother, Hattie was from Dayton, Ohio and her father, William D. Burns, a veteran vaudevillian and one of the Four Harmony Kings, was from Denver, Colorado. Foster started dance instructions at age four with Sadie Bruce. In 1941, she enrolled in the school of her father’s friend from “Shuffle Along” Sammy Dyer. She attended Carter Elementary School and while still in school Foster and four of her friends, Shirley Hall, Jean Cornell, Clarice White, and Gloria Broussard started performing as the sensational “Dyerettes.” Under Dyer’s tutelage, Foster still graduated from DuSable High School in 1948 all the while still performing with Sammy Davis, Jr., Nat King Cole, Benny Green, Ruth Brown, Roy Hamilton, Tito Puente, Billy Eckstine and other greats. Earning an A.A. degree from Wilson Junior College in 1951, Foster continued to tour the United States and Canada. Known for their polished professionalism and unexpected acrobatics, the Dyerettes performed at the Club DeLisa, the Lafayette Theatre and the Apollo Theatre.

Foster married Bobby Wilson, a baseball player with the Dodgers, in 1955 and continued to perform through 1956. However, as other members got married, the Dyerettes retired. Divorced, Foster worked in the Personnel Department at Wieboldt’s Department Stores in Chicago until the stores went bankrupt in 1988. Since 1988, Foster has been Human Resources coordinator for Chicago’s Merchandise Mart, but, despite a full career, Foster has actively supported the Sammy Dyer School of Theatre. Over the years the school has produced performers like George Patterson, Tedd Levy, Brill Barrett and Geraldine Johnson. When Mr. Dyer away passed in 1960, Dyerette, Shirley Hall directed the school from 1960 to 1998. Foster has been the director of the school since 1998.

See how Muriel W. Foster is related to other HistoryMakers
Donate Now
Click Here To Explore The Archive Today!