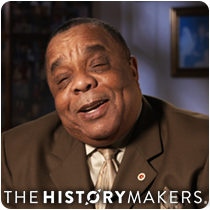 Favorite Color:
Navy Blue
Favorite Food:
Salmon
Favorite Time of Year:
Spring
Favorite Vacation Spot:
Anywhere People Are
Favorite Quote:
The Uniting Of Knowledge And Finances And Wisdom Would Be Good For Us As A People.

Favorite Color:
Navy Blue
Favorite Food:
Salmon
Favorite Time of Year:
Spring
Favorite Vacation Spot:
Anywhere People Are
Favorite Quote:
The Uniting Of Knowledge And Finances And Wisdom Would Be Good For Us As A People.

See how Munir Muhammad is related to other HistoryMakers
Donate Now

Community activist Munir Muhammad was born on March 27, 1950 in Birmingham, Alabama to Mary Henley Waller and Robert L. Waller. After graduating from Wenonah High School in 1968, Muhammad moved to Chicago, Illinois, where he first worked in the shipping and receiving department for DeMert & Dougherty, a hair care product and grooming supply company. Then, in 1970, Muhammad became an assistant code enforcer for the City of Chicago.

Muhammad joined the Nation of Islam in 1972, and began reading the texts of The Honorable Elijah Muhammad. Although he left the Nation of Islam following the death of Elijah Muhammad in 1975, he co-founded The Coalition for the Remembrance of The Honorable Elijah Muhammad (C.R.O.E.) in 1987, along with Halif Muhammad and Shahid Muslim. The organization started as a small group of individuals meeting at Muhammad’s home on the South Side of Chicago to study and discuss Elijah Muhammad’s teachings and speeches. In 1994, C.R.O.E launched C.R.O.E TV; and in 1997, the organization established the C.R.O.E. TV Production Studio in the West Englewood neighborhood. Muhammad served as the executive producer for C.R.O.E. TV. He also hosted several television programs, including The Munir Muhammad Show and Muhammad and Friends, in addition to radio programs Political Talk and The Muhammad Speaks Radio Show. Muhammad interviewed a number of notable individuals, including Minister Louis Farrakhan, Chicago Mayor Rahm Emanuel, Illinois Governor Rod Blagojevich, Illinois Representative Gus Savage, and actor Harry Lennix. C.R.O.E. TV’s programming broadcast in many cities across the United States, including in Chicago, Atlanta, New York City, and Charlotte. Muhammad and Colonel Eugene Scott also initiated an editorial partnership between The Chicago Defender and C.R.O.E. TV in 2001. In 2018, C.R.O.E. held its 31st Annual Founders Day celebration, which was attended by news anchorman John E. Davis, Judges Anne Burke and Dorothy Brown, and Reverend Al Sampson. Muhammad also served as the business manager of C.R.O.E. for over thirty years.

Muhammad served on the Illinois Human Rights Commission, and was also appointed to the Cook County Board of Corrections in 2004.

Munir Muhammad was interviewed by The HistoryMakers on May 5, 2018.

See how Munir Muhammad is related to other HistoryMakers
Donate Now