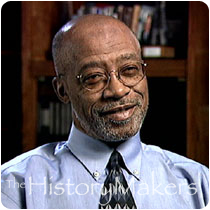 See how Mujahid Ramadan is related to other HistoryMakers

Diversity and human relations consultant Imam Mujahid Ramadan was born November 17, 1951, on the outskirts of Lake Providence, Louisiana. Raised by his stepfather and his mother, Flenorte and Elizabeth Harris, Ramadan attended Carroll Elementary School in Louisiana. When his family moved to Las Vegas, Nevada, Ramadan attended Kit Carson Elementary, J.D. Smith Junior High School, and graduated from Valley View High School in 1970. Ramadan was involved as a youth, in his church, as a youth member of the NAACP, and later as a member of the Black Panther Party. Ramadan attended Northeastern Oklahoma A & M Junior College, but dropped out and returned to Las Vegas. Ramadan worked at the West Side Boy’s Club where a hydrocephalic youngster named John “Bookie” Dorsey inspired him to return to school. Ramadan earned his B.A. degree in sociology from the University of Nevada at Las Vegas in 1976. He later became director of the West Side Boys Club.

Ramadan embraced Islam in 1975, took a Muslim name in 1981, and eventually became resident Imam of the Masjid As-Sabur in Las Vegas, Nevada, and vice-chair of the American Muslim Council (AMC). Ramadan served in the probation department of Clarke County Juvenile Services and became a policy advisor to the Las Vegas Police Department, Sheriff’s Department, and a number of elected officials including Senator Harry Reid. In 1989, Ramadan was appointed Nevada State Drug Policy Director by Governor Bill Miller. Ramadan was later appointed CEO of Nevada Partners Organization, Inc.; he also served as a national executive board member of the National Conference for Community and Justice.

Ramadan later became a member of the local interfaith council and developed a reputation for being an expert in diversity awareness training. Ramadan served as an advisor to the President’s Faith Community Initiative; a board member of the Inter-Faith Council for Workers Justice; a participant in the National Leadership Summit on Race Relations and America's Public Education System; and a trainer for the Justice Department Violent Crimes Program.

In 1983, Ramadan founded the diversity training firm, M.R. Consulting, later renamed Ramadan Ballard and Associates. Ramadan went on to serve as CEO of Ballard Communications, which he founded in 2001.

See how Mujahid Ramadan is related to other HistoryMakers
Click Here To Explore The Archive Today!