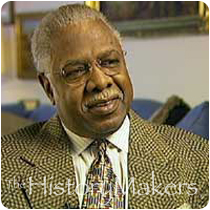 See how Morris Robinson is related to other HistoryMakers
Donate Now

Small business owner and city economic adviser Morris E. Robinson, Sr. was born on January 20, 1945, in Chicago. He was raised in Chicago and educated in its public schools, graduating from Marshall High School in 1963.

In the fall of 1963, Robinson enrolled at Loop Junior College, which he attended until the following year. In 1964, he attended Luther College in Decora, Iowa, where he spent a year before transferring to Roosevelt University. After his first year at Roosevelt, Robinson entered the Army and served from 1966 until 1970. When he returned to Chicago from active military duty, Robinson re-enrolled at Roosevelt University, where he received his B.A. in political science in 1973.

After completing his education, Robinson worked as the first black officer at First National Bank, and later was employed by Allstate Insurance. In 1990, he started his own graphic design business, Robinson Designs, and opened a wireless telephone service franchise. Robinson later joined the Economic Development Department of the city of Evanston, Illinois, and became its economic development planner. In 1999, the United Way honored him as the city's employee of the year. Robinson married Emma Scarborough in 1989 in Little Rock, Arkansas. They live in Evanston.

See how Morris Robinson is related to other HistoryMakers
Donate Now
Click Here To Explore The Archive Today!