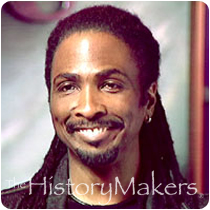 See how Morris Butch Stewart is related to other HistoryMakers

Musician Morris "Butch" Stewart, Jr., was born in Chicago, Illinois, on January 13, 1953. The third of four children, Stewart earned his high school diploma in Harvey, Illinois, and went on to attend DePaul University in Chicago.

At the age of twenty-two, Stewart and his future wife, Brenda Mitchell, began working as background vocalists for Ramsey Louis. That same year, 1975, Stewart performed in several shows with Earth, Wind, and Fire, with whom he later worked on other projects. In 1978, Stewart formed JoyArtMusic, his musical jingle production company. JoyArtMusic was hailed as one of Chicago's premiere creative houses for television and radio theme song creation, as well as advertising. Some of JoyArtMusic's more recognizable tunes include the theme song to the Oprah Winfrey Show, and the Tom Joyner Morning Show. By 1985, Stewart was producing records, as well as writing music and lyrics. In 1990, Stewart teamed up with Earth, Wind, and Fire to write "King of Groove;" throughout his career, he wrote numerous other songs for various artists.

Stewart created music for exercise videos and collaborated on a children's project, Home, with the purpose of teaching children about the importance of friendship, generosity, and family. Stewart was the owner and founder of Copia Records. Stewart and his wife also established the Art of Making Music Foundation, a nonprofit organization that raised money for music education in schools; the couple also raised two children.

See how Morris Butch Stewart is related to other HistoryMakers
Click Here To Explore The Archive Today!