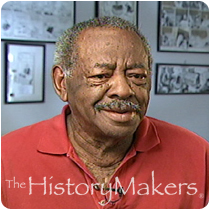 See how Morrie Turner is related to other HistoryMakers
Donate Now

Morris Turner was born on December 11, 1923, in Oakland, California, but prefers going by the name Morrie. He attended Cole Elementary and McClymonds High Schools in Oakland and graduated from Berkeley High School in June of 1942.

Turner began drawing caricatures in the fifth grade. In high school, he expanded to creating cartoons. He joined the Army-Air Force following high school graduation, and while on guard duty, he drew cartoons. His work was noticed and he was hired by Stars and Stripes to draw a series, "Rail Head," based on his own war experiences. Following the war, he created community affairs publications for the Oakland Police Department while free-lancing cartoons to national publications. Baker's Helper, a baking industry publication, was the first to buy one of his cartoons for $5.00.

Turner had had no formal art training and sought the advice and encouragement of other professional cartoonists. When he began questioning why there were no minorities in cartoons, his mentor, Charles Schultz of Peanuts fame, suggested he create one. In the early 1960s he created a series Dinky Fellas that evolved into Wee Pals, a world without prejudice celebrating ethnic differences. In 1965, the series became the first multi-ethnic cartoon syndicated in the United States. Wee Pals appears in over 100 newspapers worldwide. On Sundays an additional panel is included called Soul Corner detailing the life of a famous person belonging to an ethnic minority.

Turner has written several children's books including The Illustrated Biography of Martin Luther King, Jr. Turner has been honored by the Cartoonist Society in 2000 when he was presented their Sparky Award, has been inducted into the California Public Education Hall of Fame and was recognized by Children's Fairyland in Oakland. He is the subject of a film called Keeping the Faith with Morrie. Bill Keene so admired Turner's work that he added a young black boy to his Family Circle series named Morrie.

Turner passed away on January 25, 2014, as a widower with one son and several grandchildren. He had lived in the same house that his father purchased in 1945.

See how Morrie Turner is related to other HistoryMakers
Donate Now
Click Here To Explore The Archive Today!