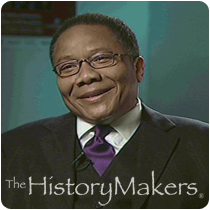 See how Monroe Anderson is related to other HistoryMakers
Donate Now

Journalist Monroe Anderson III was born on April 6, 1947, in Gary, Indiana. Growing up and attending public schools in Gary, Anderson developed a keen interest in writing at an early age. After graduation from high school in Gary, Indiana, Anderson attended Indiana University in Bloomington, Indiana, and received his B.A. degree in journalism and English literature. After completing his B.A. degree, Anderson worked as a reporter at the National Observer, as assistant editor of Ebony magazine, and as a correspondent for Newsweek magazine prior to joining the Chicago Tribune. In the late 1980s, Anderson worked as the press secretary for democratic Mayor Eugene Sawyer.

Later in his career, Anderson taught feature writing at Columbia College Chicago, and for thirteen years he was director of station services and community affairs at WBBM-TV (CBS2). During this time at CBS television station in Chicago, he became host and executive producer of the public affairs television show, Common Ground. Anderson is one of the co-authors of the nonfiction book Brothers, which was published by William Morrow & Company in 1988. During Anderson’s thirty-five-year career as an award-winning journalist, Anderson became a contributing author to Restoration 1989: Chicago elects a new Daley, a book published by Lyceum in 1991 detailing the 1989 Chicago mayoral election.

In 2003, Chicago publisher Hermene Hartman named Anderson as editor of N’DIGO, a black community newspaper, and in 2003, Anderson became the editor of SaVoy magazine. Anderson also serves as a board member to the Gilda’s Club, a cancer support center.

See how Monroe Anderson is related to other HistoryMakers
Donate Now
Click Here To Explore The Archive Today!