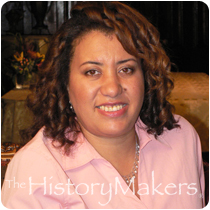 See how Monique Greenwood is related to other HistoryMakers
Donate Now

Greenwood’s family lived in the Washington, D.C. area for several generations. In the 1920s, her grandfather, Benjamin Greenwood, operated a small grocery store in the southeastern part of the city. He later owned the Greenwood Transfer Moving and Storage Company, a business that was eventually listed as one of the United States top Black owned businesses. Greenwood was inspired by her grandfather’s success. His example proved to her that racial discrimination could not stop a person who had the determination to succeed.

Not long after Greenwood’s graduation from Howard University, she began working at Fairchild Publications. Greenwood stayed at Fairchild for fifteen years; among her achievements at Fairchild was the creation of Children’s Business, which was a monthly trade magazine that provided information about children’s apparel and other products. In 1992, Greenwood published her first book Go On Girl! Book Club Guide to Reading Groups. She was also the co-founder of the Go On Girl! Book Club, which is the largest African American book club in the United States.

Along with her husband, Greenwood opened four more Akwaaba Bed & Breakfast Inns in New Jersey (2002, 2006), Washington, D.C. (2003) and New Orleans (2005). Greenwood is working on her third book which will be titled Life Under New Management: How to Fire Your Job and Become Your Own Boss.

Greenwood was interviewed by The HistoryMakers on October 11, 2007.

See how Monique Greenwood is related to other HistoryMakers
Donate Now
Click Here To Explore The Archive Today!