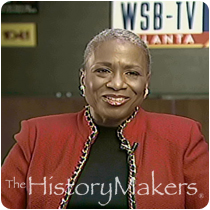 Favorite Color:
Baby Blue
Favorite Food:
Lasagna
Favorite Time of Year:
Fall
Favorite Vacation Spot:
Destin, Florida
Favorite Quote:
It Is What You Do With What You Have That Makes You What You Are.

Favorite Color:
Baby Blue
Favorite Food:
Lasagna
Favorite Time of Year:
Fall
Favorite Vacation Spot:
Destin, Florida
Favorite Quote:
It Is What You Do With What You Have That Makes You What You Are.

See how Monica Pearson is related to other HistoryMakers
Donate Now

Monica Pearson has led a distinguished career in journalism at WSB-TV in Atlanta, Georgia, as the anchor of Channel 2 Action News at five, six and eleven o’clock. Pearson has received over twenty-eight Emmy Awards as well as other awards for her reporting and her “Closeups” segments. She is also a humanitarian who assists in charitable, non-profit, and community causes.

Born on October 20, 1947, in Louisville, Kentucky, Pearson is the daughter of Hattie Wallace Jones Edmondson and the late Maurice Jones. Like her mother, Pearson attended Catholic schools during her formative and high school years. Her mother, who worked her way through school, attended St. Mary’s Academy in New Orleans, Louisiana, a prestigious boarding school for black females. Her mother was also one of the first black women to work at the Louisville Post Office.

Pearson knew at an early age that she would pursue a career in communications. One of her part time jobs in high school included working at the local black owned radio station where she did voice over work and read prayers on the station’s religious programs. She also sang country music as a teenager on a television show called Hayloft Hoedown. Pearson pursued and obtained her B.S. degree in English from the University of Louisville. She also participated in the Summer Program for Minority Groups at the Graduate School of Journalism at Columbia University in New York City. Before joining WSB-TV Channel 2, Pearson worked in public relations for Brown Forman Distiller; as an anchor and reporter for WHAS-TV in Louisville, Kentucky; and as a reporter for the Louisville Times. Pearson began her career as the first African American and the first female to anchor a daily evening newscast in Atlanta at WSB-TV in 1975.

Pearson is a recipient of numerous awards: the Women’s Sports Journalism Award, Citizen Broadcaster of the Year Award, Broadcaster of the Year Award, Women of Achievement Award, and the Southern Regional Emmy Awards. She also won first place for excellence in journalism/documentary from the Atlanta Chapter of the Society of Professional Journalists for her documentary, Hot Flash: The Truth About Menopause.

Pearson is a mother and resides in Atlanta with her mother and husband.

See how Monica Pearson is related to other HistoryMakers
Donate Now
Click Here To Explore The Archive Today!