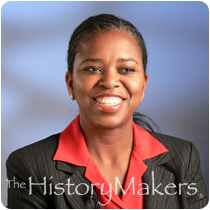 See how Moni T. Law is related to other HistoryMakers

Activist attorney, Moni T. Law was born on February 11, 1960 in Mobile, Alabama to Norma and Moody Law. Law grew up in Inglewood, Pomona and Claremont, California, attending Condit Public Elementary School in Claremont. Law graduated from Claremont High School in 1978 and attended the University of California at Berkeley. There, Law was very active, organizing rallies and protests against apartheid and nuclear weapons development and running for student body representative.

Law earned her B.S. degree in 1982, and the following year, began working as a clerk in the law offices of Nathan A. Richardson & Associates in Oakland, California. Law also worked as director of Unitas’ Campus Ministry’s Hunger Action and Education Center, organizing clothing and food drives. In 1985, Law took a job with the San Francisco Lawyers’ Committee for Urban Affairs, then with the city attorney’s office as a law clerk. Law earned her J.D. degree in 1986 from the University of San Francisco and worked for Yakima, Washington’s Evergreen Legal Services.

In 1991, Law was awarded the YWCA’s Women of Achievement in the Professions Award. Law began working for the law firm of Blaine Tamaki & Associates in 1995, while serving as a pro tem judge in Yakima’s juvenile court system. Law taught as an adjunct professor with Heritage College in 1996. Law was named a “Rising Star” in Washington Law and Politics magazine in 2000, the same year she began working for Levinson Friedman, P.S. of Seattle and represented clients in a variety of cases that included sexual harassment suits and wage claims.

In 2002, Law established her own law office, which specializes in personal injury and employment cases, particularly with regard to sexual harassment, discrimination and disability. In 2003, Law became a film producer after the start of the Iraq War, creating a documentary film, Female Faces of War, that focused on women’s roles in the conflict in Iraq. Law was the Legal Redress Chair for the Alaska/Oregon/Washington State Conference for the NAACP, is an active member of the Washington State Trial Lawyers Association and the Loren Miller Bar Association. Law joined the King County Washington Women Lawyers Board of Directors in 2007. In October of 2007, Law became Bar Leaders Program Manager with the Washington State Bar Association.

Law was interviewed by The HistoryMakers on October 28, 2007.

See how Moni T. Law is related to other HistoryMakers