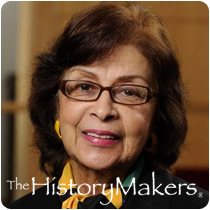 See how Miriam DeCosta-Willis is related to other HistoryMakers

University professor and author Laurie DeCosta-Willis was born November 1, 1934 in Florence, Alabama to educators Beautine and Frank DeCosta. She grew up in the South but graduated from Westover School in Connecticut and received a B.A. degree, Phi Beta Kappa, from Wellesley College, as well as M.A. and Ph.D. degrees from the Johns Hopkins University.

In her forty-year career in education, she has taught at LeMoyne and Owen Colleges (later, at the merged institution for a decade), became the first Black faculty member at Memphis State University in 1966, chaired the Department of Romance Languages at Howard University, was named Commonwealth Professor of Spanish at George Mason University in 1989, and was Director of Graduate Studies in the Department of African American Studies at the University of Maryland, Baltimore County, from which she retired in 1999.

An activist throughout her life, she organized a student protest at Wilkinson High School, joined her mother in the Montgomery Bus Boycott, was jailed in Memphis for participating in civil rights demonstrations, campaigned for Black political candidates, led a boycott of Memphis public schools, and joined protest marches in Washington when she lived there in the 1990s.

Co-founder of the Memphis Black Writers' Workshop, DeCosta-Willis has published eight books, including Blacks in Hispanic Literature, Erotique Noire, The Memphis Diary of Ida B. Wells, Daughters of the Diaspora and, recently, Notable Black Memphians. A columnist, lecturer, consultant, and visiting scholar, she was chair of the Tennessee Humanities Council, associate editor of Sage: A Scholarly Journal of Black Women, and editorial board member of the Afro-Hispanic Review.

In 1955, she married Russell Sugarmon, Jr., a civil rights attorney, and they had four children. Later, she married A. W. Willis, Jr., an attorney, businessman, and first Black elected to the Tennessee Legislature since Reconstruction.

Miriam DeCosta-Willis was interviewed by The HistoryMakers on July 31, 2003.

See how Miriam DeCosta-Willis is related to other HistoryMakers
Click Here To Explore The Archive Today!