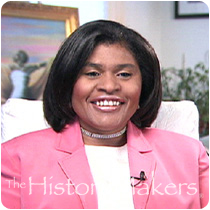 Favorite Color:
Yellow
Favorite Food:
Corn
Favorite Time of Year:
Fall and Summer
Favorite Vacation Spot:
Nassau, Bahamas
Favorite Quote:
I Must Tell You and In All Due Respect

Favorite Color:
Yellow
Favorite Food:
Corn
Favorite Time of Year:
Fall and Summer
Favorite Vacation Spot:
Nassau, Bahamas
Favorite Quote:
I Must Tell You and In All Due Respect

See how Minyon Moore is related to other HistoryMakers
Donate Now

Public affairs director Minyon Moore was born on May 16, 1958 in Chicago, Illinois to Sandra Moore Jones. In 1976, she graduated from Chicago Vocational High School. While working as assistant to the vice president of advertising at Encyclopedia Britannica, Moore attended the University of Illinois at Chicago at night, earning her B.S. degree in sociology in 1982.

Upon graduation, Moore was hired as an assistant to Operation PUSH’s co-founder, Reverend Willie Barrow. In 1988, she served as the deputy field director for Reverend Jesse Jackson’s Presidential Campaign and in 1989, she became development director for Jackson’s National Rainbow Coalition. Moore then served in multiple capacities with the Democratic National Committee, including as director of constituent outreach and also as their first African American female political director, to which she was appointed in 1995. In 1997, during the second Clinton administration, she was named deputy to White House political director Craig Smith, and subsequently became the director of the White House Office of Public Liaison, where she served as the Administration’s principal intermediary to non-government organizations and constituencies. Moore was then appointed director of White House political affairs and assistant to President Bill Clinton. In this capacity, she served as principal political advisor to the president, vice president, first lady, and senior White House staff. Moore was the first African American woman in these two directing roles. In 2000, Moore became the chief operating officer for the Democratic National Committee. She left the DNC in 2002 and joined The Dewey Square Group, a premier Democratic public affairs firm. At DSG, Moore heads its state and local affairs practices. She also a cofounded the first national African American women’s political action committee called Women Building for the Future / The Future PAC, in 2003. In 2004, Moore helped run Democratic presidential candidate John Kerry’s minority outreach program. She then served as a senior advisor in Hillary Clinton’s 2008 and 2016 presidential campaigns. Moore also coauthored For Colored Girls Who Have Considered Politics, in 2018.

Moore has won numerous awards throughout her career, including being named in the 100 Most Powerful Women in Washington by Washingtonian magazine in 2001, the 2011 Spirit of Democracy award from the National Coalition on Black Civic Participation, the Most Influential Leader award presented by Rainbow Push in 2014, the American Association of Political Consultants’ Lifetime Achievement Award and Hall of Fame inductee in 2018, and the 2019 NAACP Image Award for Outstanding Literary work in nonfiction for the book, For Colored Girls Who Have Considered Politics, coauthored with Donna Brazile, Yolanda Caraway, and Leah Daughtry.

Moore has been active on various boards and resides in Washington D.C.

Minyon Moore was interviewed by The HistoryMakers on September 25, 2019.

See how Minyon Moore is related to other HistoryMakers
Donate Now
Click Here To Explore The Archive Today!