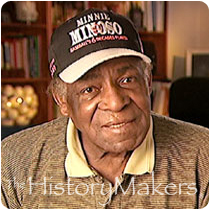 See how Minnie Minoso is related to other HistoryMakers
Donate Now

Known as the "Cuban Comet," Minoso was the first Chicago White Sox player to break the color barrier in 1951. In his first time at bat in his White Sox debut May 1, 1951, Minoso hit a home run in a game against the New York Yankees. He finished his rookie year as the American League leader in stolen bases and triples, and led the American League in stolen bases each year from 1951 to 1953.

While with the Chicago club, Minoso ushered in the era of the "Go-Go Sox." Although he was not present for the Sox' 1959 pennant win, they gave him an honorary championship ring.

Minoso was a seven-time American League All Star and a three-time Gold Glove outfielder. He was elected to the Chicago Sports Hall of Fame in 1984 and the World Baseball Hall of Fame in 1990. Since his retirement from the game, he served as an ambassador for baseball and a Sox community relations representative. In 2002, he was inducted into the Shrine of the Eternals.

See how Minnie Minoso is related to other HistoryMakers
Donate Now
Click Here To Explore The Archive Today!