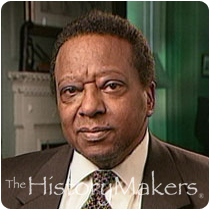 See how Milton Davis is related to other HistoryMakers

Davis was born to a father who was a school principal and a mother who was a teacher on January 10, 1932 in Jasper, Alabama. He graduated Morehouse College with a sociology degree in 1953 and came to Chicago in 1958 to attend the University of Chicago graduate school. While working at South Shore National Bank, he and three friends frequently met to discuss ideas for a community-oriented bank.

Their opportunity for bank ownership came when the South Shore bank attempted to move to the Loop to escape a changing neighborhood. South Shore residents protested the move and federal bank regulators denied it. The bank was put up for sale.

In 1973, Davis and his associates bought the bank with $800,000 in capital and a $2.4 million bank loan. They attracted depositors in those early days by personally visiting their homes. Within five years, they were able to reverse the neighborhood's decline. In 1995, ShoreBank merged with another bank holding company, becoming a half-billion dollar-plus financial institution.

Davis, who had been actively involved with integrating public schools and opening housing, retired in 2000. He had been a board member of CORE, the Chicago Community Trust, Columbia College, the Field Foundation of Illinois, and ETA for the Creative Arts.

See how Milton Davis is related to other HistoryMakers
Click Here To Explore The Archive Today!