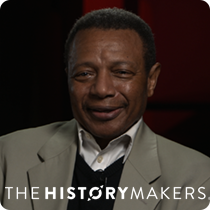 See how Miller London is related to other HistoryMakers
Donate Now

While in college, London worked in the sales department at both Star Hickey Ford and then the Bill Markley Chevrolet dealerships in Detroit. In 1969, London was hired as the first African American regional sales manager at Motown Records and was the first African American to work in any major record company’s sales department. London was later promoted as the record company’s executive vice president and general manager for the company. London worked at Motown Records for twenty-one years, before he left in 1990, and joined RCA Records in New York. There, he became the first African American to head a label’s sales division for all music genres. He was later promoted to vice president of product and development, and became vice president of marketing. He then joined A&M Records in Los Angeles, California as executive vice president and general manager of its urban music division, where he worked with Jimmy Jam and Terry Lewis, CeCe Peniston and Barry White. London then assisted the N.W.A. rapper Ice Cube develop his independent record label, Lench Mob Records. In 1994, London became the president of The Urban Network magazine. When Clear Channel Entertainment purchased the magazine, London became its executive vice president of urban entertainment. In 2003, London purchased The Urban Network from Clear Channel Entertainment and became its president and CEO. In 2017, he joined The Celeb Group as senior vice president.

Miller London was interviewed by The HistoryMakers on October 16, 2017.

See how Miller London is related to other HistoryMakers
Donate Now