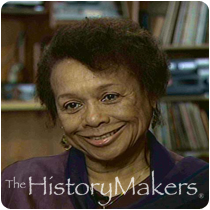 See how Micki Grant is related to other HistoryMakers
Donate Now

Lyricist, composer, writer and performer, Micki Grant was born to Gussie and Oscar Perkins on June 30, 1929 in Chicago, Illinois. Her mother worked for Stanley Products and her father was a master barber and self-taught pianist. Encouraged by her parents to pursue music, writing and acting, Grant began taking piano lessons at eight years old, and at age nine, she took drama classes from Susan Porché. After high school, she pursued her acting career in earnest. Moving to Los Angeles, under the tutelage of her cousin, Jeni LeGon, a Hollywood tap dancer and performer, Grant was cast in James V. Hatch and C. Bernard Jackson’s Fly Blackbird. She moved with the show to New York City, where she also earned her B.A. degree in English and theatre at CUNY’s Lehman College, graduating Summa Cum Laude.

It was in New York that the writer, musician and performer consolidated her talents. While cast in Jean Genet’s long-running play, The Blacks, Grant began studying acting with Herbert Berhof and Lloyd Richards. As a result of her stage work, she won a major role in the daytime series Edge of Night. She also began to write a musical score with Vinnette Carroll, with whom she was to enjoy a successful collaboration that included, Don’t Bother Me, I Can’t Cope, The Ups and Downs of Theophilis Maitland, Step Lively, Boy and Croesus and the Witch. Grants other Broadway credits include Your Arms Too Short to Box With God in 1976 and Working in 1978. As a lyricist, Grant worked on Eubie in 1978 and It’s So Nice to Be Civilized in 1980. Her other credits in music and lyrics includes J. E. Franklin’s The Prodigal Sister in 1974 and music and lyrics for Phillis in 1986. She also wrote the English lyrics for Jacques Brel Blues.

Grant received a Helen Hayes Award for her performance as Sadie Delaney in a two-year tour of Having Our Say in 1996, which also ran six-weeks in Johannesburg, South Africa in 1998. She is the recipient of the National Black Theatre Festival’s Living Legend Award in 1999 and the AUDELCO’s Outstanding Pioneer Award in 2000. In February 2005, she was honored at the New Federal Theatre’s 35th Anniversary Gala.

See how Micki Grant is related to other HistoryMakers
Donate Now
Click Here To Explore The Archive Today!