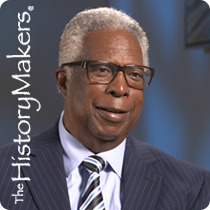 See how Mickey Stevenson is related to other HistoryMakers

Music executive Mickey Stevenson was born on January 4, 1937, in Detroit, Michigan, and raised by his mother, blues singer Kitty “Brown Gal” Stevenson, and stepfather Ted Moore. From the age of eight, Stevenson performed in a singing trio with his younger brothers. In 1950, the group won first place at Amateur Night at the Apollo Theater in New York City. However, Stevenson’s musical career halted in 1953 when his mother, the group’s coach and producer, passed away from cancer. Stevenson attended Detroit’s Northeastern High School.

Stevenson joined the U.S. Air Force in 1956, where he was part of a special unit that organized entertainment for the troops. While on furlough in 1958, Stevenson saw a performance by the Four Aims—later known as the Four Tops—which inspired him to leave the military and pursue a career in music. Stevenson joined the Hamptones, touring with famed bandleader Lionel Hampton. Upon his return to Detroit, Stevenson met Berry Gordy, who told him of his plans to start a record label. Stevenson briefly worked as a producer and songwriter for Carmen Carver Murphy’s gospel label, HOB Records, until 1959, when Gordy hired him to head the artists and repertoire department at Motown Records. As Motown’s A&R executive, Stevenson was responsible for talent scouting, auditions, and managing the artistic development of recording artists and songwriters. Stevenson was also responsible for organizing and establishing the company's in-house studio band, known as the Funk Brothers. Stevenson worked on Motown’s first number one hit: the 1961 song “Please Mr. Postman” by the Marvelettes, and went on to work with such classic Motown acts as Diana Ross and the Supremes, Marvin Gaye, the Temptations, the Four Tops, Stevie Wonder, Mary Wells, the Contours, Martha and the Vandellas, and Gladys Knight and the Pips. Stevenson toured the country with the Motortown Revue, and created the Motown Orchestra to play during the shows, while also serving as the orchestra’s conductor at the suggestion of Smokey Robinson. In 1968, Stevenson was replaced by Eddie Holland of Holland-Dozier-Holland, Motown’s top production team, as head of artists and repertoire. He then worked briefly as head of MGM’s Venture Records, and recorded his only album, Here I Am in 1972. Stevenson later began producing stage musicals.

Stevenson was honored during the opening of Detroit’s Motown Museum in 2003.

Mickey Stevenson was interviewed by The HistoryMakers on November 17, 2016.

See how Mickey Stevenson is related to other HistoryMakers
Click Here To Explore The Archive Today!