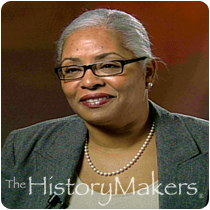 See how Michelle L. Collins is related to other HistoryMakers
Donate Now

Michelle Lynn Collins was born on March 27, 1960, in Chicago, Illinois. In 1978, Collins graduated from the University of Chicago laboratory schools, where she attended since the first grade. She then went on to earn her undergraduate degree in economics from Yale University in 1982 and her M.B.A. degree from Harvard University in 1986.

Collins began her career in 1986 at William Blair & Company, a Chicago-based investment firm offering investment banking, asset management, equity research, institutional and private brokerage and private capital to individual, institutional, and issuing clients. Collins primarily advised clients on public equity offerings. Her clients were primarily in the direct marketing, distribution and retailing industries and included Henry Schein, Inc., CDW Corporation, Lands’ End, Inc., Coldwater Creek, Inc., and United Stationers, Inc., among other public and private companies. Collins also advised clients on mergers and acquisitions. In 1991, Collins advanced to become a Principal Partner in the Corporate Finance Department of William Blair & Company. In 1997, Collins left the company to start a private equity firm with John Svoboda, called Svoboda, Collins, L.L.C. From 1998 to 2006, Collins served as Managing Director of Svoboda Capital Partners, L.L.C. She was also an Advisory Board member and still serves in that capacity, although she no longer serves as the managing director. The firm focuses its investments on business service companies and value-added distribution businesses. It has over $250 million of capital under management which it invests in middle market companies either through management buyouts, leveraged recapitalizations, or growth equity investments. In addition, Collins was a board member and director of CDW Computer Centers, Inc., from 1996 to 2007. She served as CDW’s Audit Committee Chair for seven years and previously served on their Compensation Committee. From 1999 to 2004, Collins was a board member and a director of Coldwater Creek, Inc., a specialty retailer of women’s apparel, accessories, jewelry, and gift items. Collins has been a board member and past president of Chicago Sinfonietta, helping to restructure the Sinfonietta’s business model and placing it on a more secure financial foundation. In 2003, Collins became a director and board member of Molex, Inc., a global manufacturer of electronics, electrical and fiber optic interconnection products and systems.

Collins is a trustee of The Field Museum, the Chicago Historical Society, Rush-Presbyterian-St. Luke’s Medical Center, the Erikson Institute, the Chicago Urban League, the YMCA, Chicago Symphony Orchestra and the Renaissance Schools Fund. Collins is also a member of several professional and civic organizations in Chicago, including The Chicago Network, The Chicago Finance Exchange, Women Corporate Directors, The Economic Club of Chicago, The Commercial Club of Chicago and the Henry Crown Fellows Program of Aspen Institute.

See how Michelle L. Collins is related to other HistoryMakers
Donate Now
Click Here To Explore The Archive Today!