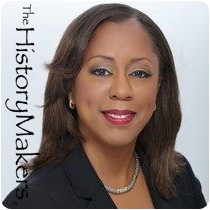 Favorite Color:
Brown
Favorite Food:
Pizza
Favorite Time of Year:
Summer
Favorite Vacation Spot:
Europe
Favorite Quote:
To Whom Much Is Given, Much Is Required.

Favorite Color:
Brown
Favorite Food:
Pizza
Favorite Time of Year:
Summer
Favorite Vacation Spot:
Europe
Favorite Quote:
To Whom Much Is Given, Much Is Required.

See how Michelle Gadsden-Williams is related to other HistoryMakers

Gadsden-Williams served as a diversity practitioner for more than twenty years in pharmaceutical and financial services. She held positions of increasing responsibility in the diversity management and staffing functions at Merck & Company, Inc., including as senior university relations and diversity consultant, future-talent program and diversity manager, and manager of diversity programs. Gadsden-Williams also held positions in the human resources division and in product management at Philips-Van Heusen Corporation and Wakefern Food Corporation in New Jersey. In 2006, Gadsden-Williams became the first African American executive director of diversity and inclusion at Novartis Pharmaceuticals Corporation. She was later appointed as managing director and global head of diversity and inclusion and as a member of the Talent, Branding and Communications Management Committee at Credit Suisse AG based in Zurich, Switzerland.

Gadsden-Williams has been profiled in Black Enterprise Magazine, Diversity Executive, Ebony, Essence, Fortune, The New York Times and The Wall Street Journal. Gadsden-Williams is the recipient of a number of community service awards and accolades for her work as a diversity practitioner. She received Novartis’ Scientific Operations Business Excellence Award in 2004 and its Human Resources Excellence Award in 2003. In 2005, she was honored at the YWCA of Central New Jersey’s Tribute to Women in Industry Gala. She was the 2010 recipient of the Maya Way Award for Diversity Leadership from Dr. Maya Angelou, and has received an Honorary Doctorate of Humane Letters Degree from Kean University.

Michelle Gadsden-Williams was interviewed by The HistoryMakers on July 13, 2013.

See how Michelle Gadsden-Williams is related to other HistoryMakers
Click Here To Explore The Archive Today!