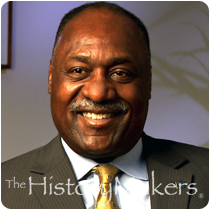 See how Michael W. Lewis is related to other HistoryMakers
Donate Now

Corporate executive Michael Ward Lewis was born on September 15, 1949 in Metropolitan Detroit. He was one of Martha and Ward Lewis’ eight children. Lewis graduated from Ferndale High School before going on to receive his B.B.A. degree from Western Michigan University in 1971. Lewis then attended Indiana University in Bloomington where he earned his M.B.A. degree in 1976.

Lewis is a member of the Harris Bank Diversity Council as well as the Illinois Government Finance Officers Association and the Zoning Board for the village of Olympia Fields. In 2007, Lewis served as Chairman of the Board of Chicago United and in 2009; he became Co-Chair of the BMO U.S. Sustainability Counsel at Harris. For the past three years Lewis has participated in Harris Bank’s “Volunteer Day” in partnership with non-profit organizations. Lewis also sits on the Board of Directors for the Western Michigan University Foundation, a position he has held since 2009. He is also a past reader in the Chicago Public Schools “Real Men Read” program and has participated in several “career day” events in local public schools. A member of Kappa Alpha Psi fraternity, he was recognized as a “Business Leader of Color” by Chicago United and ‘Who’s Who in Black Chicago.

Michael Lewis was interviewed by The HistoryMakers on May 26, 2010.

See how Michael W. Lewis is related to other HistoryMakers
Donate Now
Click Here To Explore The Archive Today!