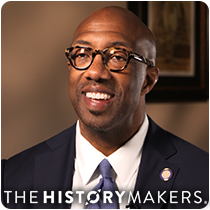 See how Michael Sorrell is related to other HistoryMakers
Donate Now

Academic administrator Michael Sorrell was born on November 11, 1966 in Chicago, Illinois to Wade J. Sorrell and Vera Williams. He graduated from St. Ignatius College Prep in Chicago, Illinois and enrolled at Oberlin College in Oberlin, Ohio, where he earned his B.A. degree in government in 1987. Sorrell was the recipient of the Sloan Foundation Graduate Fellowship to attend Harvard University. He later received his M.S. degree in public policy from Duke University in Durham, North Carolina. Sorrell continued his education at Duke University, where he was one of the founding members of the Journal of Gender Law & Policy, and served as the vice president of the Duke Bar Association, and earned his J.D. degree. In 2015, Sorrel earned his Ed.D. degree from the University of Pennsylvania in Philadelphia, Pennsylvania.

After completing law school, Sorrell worked for several law firms in Dallas, Texas. He then served as a special assistant in the executive office of President Bill Clinton. After serving in the Clinton administration, Sorrell founded a public affairs consultancy. In 2001, Sorrell was elected to the Board of Trustees for Paul Quinn College in Dallas. He became the 34th president of the institution in 2007.

Sorrell has been the recipient of many awards and acknowledgments. In 2016, he was named the “HBCU Male President of the Year” by HBCU Digest and was awarded the Dr. Martin Luther King, Jr. Justice Award by the Dallas Bar Association. Sorrell was also named as one of “America’s 10 Most Innovative College Presidents” by Washington Monthly and was the recipient of the Father of the Yeat Award from the City of Dallas.

Sorrell has been active in many organizations including the Sanford School of Public Policy at Duke University, the College Board, the Center for Minority Serving Institutions at the University of Pennsylvania, Amegy Bank, Teach for America, the Dallas Regional Chamber, Earth Day Texas, the Southern Methodist University Tate Distinguished Lecture Series, and Paul Quinn College.

Sorrell and his wife, Natalie, have two children, Michael Augustus and Sage Louise-Sinclair.

Michael Sorrel was interviewed by The HistoryMakers on September 16, 2017.

See how Michael Sorrell is related to other HistoryMakers
Donate Now