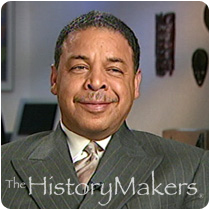 See how Michael Scott, Sr. is related to other HistoryMakers
Donate Now

Cable industry executive and president of the Chicago Board of Education, Michael Scott, Sr. was born September 4, 1949, and raised on Chicago’s West Side. Following his graduation from Hales Franciscan High School, Scott attended Fordham University, where he earned a bachelor’s in urban planning. While still in high school, Scott also considered a career as a professional athlete, having drawn attention from coaches for the St. Louis Cardinals and the Pittsburgh Pirates, though an injury prevented him from following through with this.

After earning his B.A. from Fordham, Scott began working for the Pyramid West Development Corporation, where he served as vice-president and became highly involved in the North Lawndale community of Chicago. In this position, Scott was instrumental in the rehabilitation of 1,500 housing units, building a senior center and establishing the Community Bank of Lawndale. In 1978, Scott became director of community development of the Lawndale People’s Planning & Action Council, where he remained for four years. During that same time, he was elected to the Chicago Board of Education.

His involvement in the community was recognized by then-Chicago Mayor Harold Washington, and Scott was appointed deputy director and later director of the Department of Special Events. He also served as special assistant to the mayor in charge of communications. Following Washington’s untimely death, Scott remained active in city politics, and during Richard Daley’s first year in office, he was named chief cable administrator for the City of Chicago’s Office of Cable Communications.

Leaving the government, Scott remained in the cable industry, taking a position with AT&T Broadband and continuing on in his current position as vice-president of regulatory affairs for Comcast.

See how Michael Scott, Sr. is related to other HistoryMakers
Donate Now
Click Here To Explore The Archive Today!