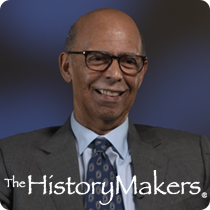 See how Michael Lomax is related to other HistoryMakers

Nonprofit executive Michael Lomax was born on October 2, 1947, in Los Angeles, California to parents Hallie Alemena Davis and Lucius W. Lomax, Jr. He moved to Tuskegee, Alabama in 1961, where he attended Tuskegee Institute High School. He earned his B.A. degree in English from Morehouse College in Atlanta, Georgia, in 1968, his M.A. degree in English literature from Columbia University in New York in 1972, and his Ph.D. degree in African American studies from Emory University in Atlanta, Georgia in 1984.

After graduation, Lomax began teaching English at Morehouse College. In 1974, he was hired as the director of research and special assistant to the mayor of Atlanta. While in this position, Lomax helped establish the City of Atlanta’s Office of Cultural Affairs, where he served as director. In 1978, Lomax was elected to the Fulton County Board of Commissioners. Two years later, he became the first African American to be elected as board chairman, a position he held for twelve years. In 1981, Lomax began working as a professor of English at Spelman College in Atlanta. He served as the president of The National Faculty in Atlanta from 1994 to 1997. From 1997 to 2004, he served as president and professor of English and African world studies at Dillard University in New Orleans, Louisiana. Lomax then began serving as the president and chief executive officer of the United Negro College Fund in Washington, D.C.

Lomax has served on the board for Teach for America and the KIPP Foundation, as well as the Carter Center, the High Museum of Art in Atlanta, and the Studio Museum of Harlem. He was a member of the founding Council of the Smithsonian Institution’s National Museum of African American History and Culture. He also founded the National Black Arts Festival in 1978. Lomax served on the President’s Board of Advisors on Historically Black Colleges and Universities under President George W. Bush. He has received several awards as well, including the Emory Medal and several honorary degrees.

Lomax and his wife, Cheryl, have two daughters, Michele and Rachel.

Michael Lomax was interviewed by The HistoryMakers on January 31, 2017.

See how Michael Lomax is related to other HistoryMakers
Click Here To Explore The Archive Today!