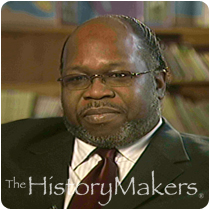 See how Michael Evans Carter is related to other HistoryMakers

Michael Evans Carter, Chief Executive Officer (CEO) of V.E. Carter Development Group, was born on April 12, 1962, to Lorraine Peters Carter and Veledis Edwin Carter in Milwaukee, Wisconsin. Carter graduated from the University School of Milwaukee in 1980. He received his B.A. degree in television production and business administration from Howard University in 1985.

While at Howard University, Carter founded a video production company. He received a SIBA award for an interview with Jesse Jackson, Sr. After college, he returned to Milwaukee to apply his television production skills to aid the educational mission of the V.E. Carter Development Center, which was founded by his parents in 1971. Through Carter Educational Systems, a subsidiary of Carter Development Group, Carter produced a series of video tapes teaching math teachers how to teach math to children as well as two video series teaching the Swahili and Yoruba languages to children. Carter also worked as a cameraman for the Milwaukee Bucks basketball team. Carter moved to Detroit in 1990s and worked for the Detroit Cable Commission as a producer and director during the Dennis Archer administration. In 1994, Carter began working as an executive assistant to his mother at V.E. Carter Development Center. He also served as the organization’s facilities and building manager. Carter became CEO of V.E. Carter Development Group when his mother passed away in 2006. V.E. Carter Development Group operates the center along with a K-5 charter school, the Carter School of Excellence, and offers social service programs to central-city residents. The V.E. Carter Development Group is a partner with the Milwaukee Public School System. Carter Group programs also include two north side drop-in child care centers and case management services for non-violent offenders.

Carter is married to Lori Carter. They have two children: a son Courtney, and a daughter Micah.

See how Michael Evans Carter is related to other HistoryMakers
Click Here To Explore The Archive Today!